Nile, considered the longest river in the world, travels 4,130 miles, cutting through 11 African countries, jungles and deserts, before emptying itself into the Mediterranean Sea. Though Nile covers many countries of Africa, cruising on the river is often limited to Egypt, as most of the tourists join the cruise to explore the mystic land of Pharaohs. The Nile cruises of Egypt provide an ample opportunity for the traveler to enjoy the mysterious history of the country which dates back to more than 5000 years, from the luxury of their rooms, without having to care to pack and unpack their luggage, prepare itineraries for travel and make travel arrangements to move from place to place. The cruises are like floating hotels, which provide the tourists every comfort they desire.

Get Glimpse of Monuments, Rural Life and More 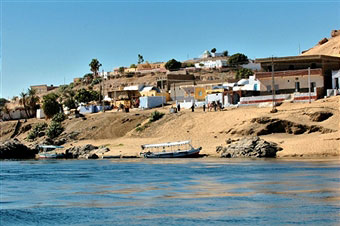 Most of the Egypt is populated across the Nile Delta and the major cities are also situated on the banks of river. As the cruises sail to towns, the tourists can enjoy the wonder of the monuments like The Great Pyramids of Giza, Statue of Ramses II, The Sphinx, Rock Carvings, valley of kings, temple of Mormon and many more.

While traveling through the waters of Nile a tourist can have a glimpse at the underbelly of Egypt, as well the rural Egypt, which has not been affected much by the modern world. Here one can enjoy the sight of agriculturists tending their fields with wooden plows, transporting their products by means of donkeys and camels and living in homes made of mud-bricks. The experience can be said to be the closest that a man can get to time travel.

Length of the Cruise

Most of the Nile cruises travel between the two major cities of Egypt – Luxor and Aswan. Though the number of days can be chosen by the traveler, they don’t have much choice as the cruises are arranged for 3, 4 or 7 days and nights. The longer cruise tours which may last nearly a fortnight include day travels overland to interior locations, exploring the Cairo, pyramids, Abu Simbel, museums and many more.

As the tourists board the ship, they are given a warm welcome with refreshing drinks. The cruises have wonderful cabins with amenities like AC, telephones, internet, private baths, drawers, wardrobes, fridge and T.V. connections. The cruise also provides excellent international cuisine served in buffet style which can satisfy the taste bud of any traveler.

The ships are created keeping in the mind the needs of modern tourists who hail from all over the world. Fun and entertainment is in galore. The decks have facilities like bars, discos, casinos, plunge pool, Jacuzzi, spas and gyms so that the tourists feel at home as they enjoy the grand views and breathe in the clean fresh air. Those who look for tans can enjoy sunbathing on the decks.

Traveling to the sites of importance, entry fee (wherever required) and other requirements are efficiently covered under the cruise fee. You also get guides who are learned Egyptologists, who can fluently explain in English the history and importance of the monument or place the tourist is cruising through. Many of these tourist guides are fluent in other international languages too.

Though the Nile cruises operate all around the year, the best time to travel aboard would be during the cool season which lasts between October to March.