To get the real safari experience of genuine vast wildernesses and truly spectacular wildlife viewing, you have to head to Africa. The Maasai Mara National Reserve (MMNR) has an expanse of about 583 sq miles or 1,510 sq km in south-western Kenya. It is a part of the Mara-Serengeti ecosystem, which extends south into neighboring Tanzania. 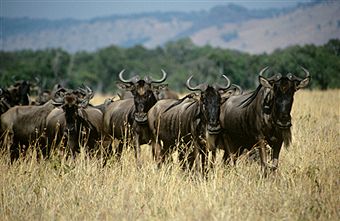 The main attractions of Masai Mara are of course the wild animals that can be viewed up close and personal at this wildlife sanctuary. The lion, the leopard, black rhinoceros, African elephant and the African buffalo are sometimes referred to as the Big Five, and constitute the main attractions.

Apart from these you can observe other wildlife in abundance too: wildebeest, zebra, giraffe, Thompson’s gazelle and numerous other antelope species as well as hyenas, jackals etc. The reserve is home to the bat eared fox as well as some 470 identified species of birds.

It is possible to see spectacular sights such as the migration of large herds at specific times of the year. The great wildebeest migration between july and October is supposed to be truly stunning.

You can see a pride of lions feasting on their kill or simply lolling in the shade with their young. If the sight of lioness taking down a giraffe is not quite to your taste you can enjoy the sight of the magnificent ostrich loping across the savannah.

The Mara River, seasonal rivulets and the endless open grasslands make for a spectacular backdrop to uninterrupted wildlife viewing. It is possible to spot hippos and crocodiles at the Mara and Talek rivers.

There is a limit to the number of vehicles that are allowed into the reserve (no hordes crowding around) and regular patrolling by rangers (practically no poaching). As for the shutterbugs, the opportunities for photography are practically unlimited.

Getting to Masai Mara

The reserve is about 270 km from the Kenyan capital of Nairobi or about 5 hours by road. It is also possible to fly out of Nairobi to reach the reserve. There are lodges and camps within the reserve from where visitors can take advantage of animals gathering in the early morning or a serene sun rising over the African grasslands with their distinctive clumps of acacia trees. Hot air balloons also make it possible for visitors to take in an aerial Safari.