The picturesque hill station of Dalhousie is situated at an altitude of 2040 m on the Dhauladhar Mountain range of the western Himalayas about 56 km from Chamba in the state of Himachal Pradesh. The town spreads over the 5 hills of Balun, Kathlog, Petreyn, Tehra and Bakrota. Dalhousie is surrounded by dense oak, pine and deodar forests with magnificent views of the valleys of Chenab, Ravi and Beas. 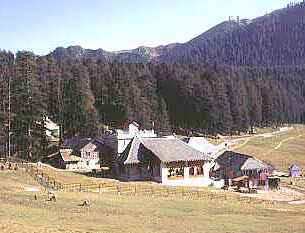 Following are some of the must-visit places here:

Bakrota Hills are about 4.8 km from Dalhousie at an altitude of 2,085 m. With crisp & refreshing mountain air and dense deodar forests, Bakrota Hills offer awesome views of snow capped mountains.

About 10 km from Dalhousie and at an altitude of 2,745 m is the awesome Dainkund Peak with enthralling views of the Rivers Beas, Ravi and Chenab. It is also known as Dayankund Peak or Singing Hill.

The scenic view point of Kalatop (or The Black Cap) in the Kalatop Khajjiar Wild life sanctuary is 8.5 km from Dalhousie at an altitude of 2,440 m. It offers a magnificent view of the rolling hills, green forests & white snow capped mountains. It also houses a forest rest house for the convenience of the visitors.

The enchanting saucer shaped meadow of Khajjiar surrounded by dense cedar or deodar forests, is located 27 km from Dalhousie at a height 2000 m above sea level. Also called as ‘Mini Switzerland’, major attractions of Khajjiar include a small peaceful lake with 2 floating islands, a golden domed temple and a nine hole golf course.

Panchphulla or Five Bridges is a scenic location with a natural tank and 5 small bridges. The tomb of Sardar Ajit Singh, a renowned freedom fighter rests here. The stream of Panchphula supplies drinking water to Dalhousie and Bahloon.

On the way to Panhcphulla are the 7 springs of Satdhara at an altitude of 2,036 m with water believed to have medicinal properties.

The 150 year old temple of Lakshami Narayan with an outstanding statue of Vishnu is located in the Sadar Bazaar area.

Situated 330 m above Gandhi Chowk is the beautiful hill of Moti Tibba. One can walk through its dense forests of rhododendron, fir, pine and oak for an unforgettable experience. Langurs and macaques can be seen here.

The historical Bara Pather Temple or The Bhulwani Matha Temple situated in the village of Ahla at the foot of Dayan Kund Peak dates back to 150 years. Fair is held in July bringing several visitors.

Situated about 2 km from Dalhousie is Jandri Ghat featuring a noble palace within towering pine trees. Jandri Ghat is a perfect place for picnickers with its gurgling streams and air laden with pine fragrance. The rulers of Chamba used to reside here.

The Round is a popular walking trail in the Bakrota Hills with several lookouts offering delightful views of the mountains and valleys.

Khajjiar Lake is a peaceful and serene lake located at a distance of 16 km from Dalhousie in the Kalatop Khajjiar Wildlife Sanctuary and surrounded by dense cedar or deodar forests. The lake remains full throughout the year.

Chamera Lake is an artificial lake formed by the Chamera Dam built on the River Ravi. The Chamera Dam is situated at a distance of 36 km from Dalhousie at an altitude of 892 m.

The pristine lake of Subhash Baoli named after Netaji Subhash Chandra Bose is situated at a distance of 1.6 km from Dalhousie at an altitude of 2,085 m. One can have a stunning view of snow capped mountains from this place. A cascading waterfall ending in a glacial stream is found opposite Subhash Baoli Lake.

The 3 malls or circular roads in Dalhousie are the Upper Bakrota, Moti Tibba and Potreyn Malls. Moti Tibba Mall and Potreyn Mall are in the shape of the figure 8. Gandhi Chowk, Subhash Chowk, St. Francis Church, St. John’s Church and the Sacred Heart School are some of the places situated on these 2 malls. The northern part of Moti Tibba Mall is called Thandi Sadak and the southern part is known as Garam Sadak. The Upper Bakrota Mall is the longest mall with a length of 4.6 km. The malls offer heart stopping views of the Himalayas with the best views from the Upper Bakrota Mall.

Located about 13 km from Dalhousie is the enthralling Kalatop Khajjiar Wildlife Sanctuary. It is at an altitude from 1,185 m to 2,768 m and lies in the catchment of River Ravi. The wildlife sanctuary features dense oak, rhododendron, pine and cedar forests. Some of the interesting mammals found here are the barking deer, himalayan black bear, brown bear, leopard, cat, goral, jackal, langur, marten, serow and the giant flying squirrel. The temperatures here range from a chilly -10?C to a warm 35?C.

Also called as the Church of Scotland, St. Andrew’s Church is situated in Baloon, Dalhousie cantonment.

St. Johns’ Church, the oldest church in Dalhousie is about 2 km from Gandhi Chowk.

St. Patrick’s Church is the biggest church in Dalhousie and is located in Baloon, Dalhousie Cantonment on the Military Hospital road.

The historic temple town of Chamba is situated 56 km from Dalhousie at an altitude of 920 m, standing on a ledge overlooking River Ravi. The Lakshminarayana Temple Complex has temples dedicated to Shiva and Vishnu. The most ancient of Chamba’s temples is from the 7th century AD. The Rang Mahal or Painted palace has several colorful murals. The Bhuri Singh Museum has several artifacts, paintings, sculptures, stone inscriptions, carved woodwork, embroideries and ancient weapons in its collection. Chamba is famous for its stone and wood slate roofed houses with carved balconies and doors, Chamba rumals (handkerchiefs) and leather chappals.

The temple town of Baijnath is located 14 km from Palampur on the banks of the River Gomti. The Shiv Vaidyanath temple dating to the 13th century is found here and contains the lingam of Shiv Vaidyanath. The temple features aesthetic balcony windows, ornamented foliage and exquisite carvings.

The scenic village of Bir surrounded by an oak forest at the foot of the Dhauladhar Hills is the site of a yearly fair. People come from the surrounding areas to this fair and there is a lot of singing, dancing and consumption of lugri (rice beer).

Fourteen km from Bir, Billing is the place where hang gliding tournaments are held every year.

Walking from McLeod Ganj and climbing a distance of 12 km to a level clearing on a spur, at an altitude of 2,827 m one can get to the charming Triund. Enormous rocks, mountain plants and ice covered ponds can be seen here. One can also have a pleasing view of the Pong Dam.

Dharamsala is a hill station where the Tibetan spiritual leader, The Dalai Lama has made his residence. The place is divided into Upper and Lower Dharamsala. About 17 km from Dharamsala is the Kangra Fort situated on top of a precipice and overlooking the confluence of the Bangangat and Majhi rivers.

The Tibetan refugee town of McLeod Ganj is situated at an altitude of 1800 m. The colorful prayer wheel outside the Namgyalma Stupa is a big attraction. Tibetan women can be seen selling handicrafts, jewellery and Tibetan clothing. The School and Library of Tibetan Studies, the Tibetan Children’s Village School and the Tibetan Institute of Performing Arts are close to McLeod Ganj. Two km from McLeod Ganj is the Hindu temple of Bhagsunath. A marvelous waterfall nearby is a popular picnic spot.

Location: Dalhousie is located about 56 km from Chamba in the state of Himachal Pradesh, India.

Accommodation: Hotels of all budgets are available.

By Flight: The 2 airports closest to Dalhousie are Gaggal (Kangra) at a distance of 135 km and Amritsar at 191 km.

By Train: Dalhousie is served by the broad gauge railway station of Pathankot which is situated 120 km away. One can take a bus from Pathankot Railway Station to Dalhousie and the travel time is around 3 hours.

By Road: Dalhousie has a good road network with every important town in the state of Himachal Pradesh and is well served by regular bus services. The distance from Dalhousie to Chandigarh is 300 km, Delhi 563 km, Jammu 188 km, Amritsar 191 km, Chamba 56 km, Jalandhar 192 km, Manali 360 km and Pathankot 80 km.