The mysteriously beautiful town of Gangtok is situated in the Shivalik Hills of the eastern Himalayan mountain ranges at an altitude of 1,676 m (5,500 ft). It is the capital of the state of Sikkim in India. The population consists of mainly Nepalis, Lepchas and Bhutias. Gangtok may mean ‘Hill Top’ or ‘Loft Hill’ according to some. The River Roro Chu flows past the town of Sikkim and meets the River Ranikhola at Ranipul. The world’s third highest mountain, Mount Kanchenjunga at an altitude of 8,598 m or 28,208 ft. can be seen to the west of Sikkim. 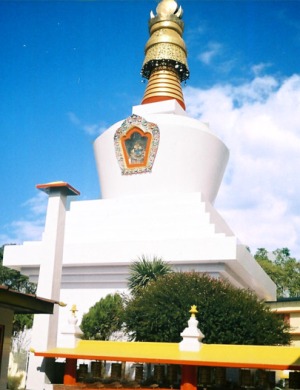 There are thick temperate and deciduous forests of poplar, birch, oak, and elm and evergreen, coniferous trees around Gangtok. The vegetation also includes several varieties of orchids and bamboos.

With many monasteries, religious educational institutions and institutes of Tibetology present here, Gangtok is an important place for Tibetan Buddhist culture and religious learning.

Among the many places to see around, here are the important ones:

A small stretch of flat road above the town of Gangtok, the Ridge is close to the main market. The White Hall, chief minister’s official residence and a palace gate are found on the tree lined Ridge.

Do-Drul Chorten (Stupa) houses the complete mandala sets of Darjee Phurba (a set of Holy Books), complete ‘Zung’ (mantras) and other religious objects. The Stupa was built in 1945. Surrounding this Stupa are 10 Mani-Lhakor or prayer wheels.

The Rumtek Monastery situated at a distance of 24 km from Sikkim is one of the most sacred of monasteries in Buddhism. It has the distinction of being the largest monastery in the eastern Himalayas. Several rare Tibetan Buddhist scriptures and religious objects are housed in this monastery.

Namgayal Institute of Tibetology is a centre for research into Mahayana Buddhism and the Tibetan language, culture and traditions. Rare Tibetan, Sanskrit and Lepcha manuscripts, statues, Thankas (tapestry used in Buddhist liturgy) and Buddhist icons are found in this monastery.

Phodong Monastery is situated about 40 km from Gangtok. It dates back to the 18th century. An annual festival is held on the 28th and 29th day of the 10th month of the Tibetan calendar and ‘Cham’ Dance is performed on this occasion by the monks.

Situated about 6 km from Gyalsing town, Pemayangtse Monastery was originally a small temple in the 17th century and was later rebuilt into a monastery.

Labrang Monastery is about 1 km from Phodong, and belongs to the Nyingmapa sect of Tibetan Buddhism. Labrang means the dwelling place of the Lamas or monks.

The Himalayan Zoological Park is located in Bulbuley in East Sikkim District, at a distance of 3 km from Gangtok and an altitude of 5,840 ft. The park covers an area of 205 hectares. It has in its collection an interesting array of wildlife which includes the Himalayan Black Bear, the barking deer, the snow leopard, the leopard cat, the Tibetan wolf, the Masked Palm Civet, the Red Panda and the spotted deer. The zoo also offers a stunning view of Mount Kanchenjunga.

The pretty Ipecac Garden, named after the plant Ipecac, is at a distance of 14 km from Gangtok and 2 km from Ranipul. The garden covers an area of 6 acres. The garden has several varieties of orchids and medicinal plants. It is an ideal spot for picnic. One can enjoy swimming in the swimming pool which is close by.

The Deer Park also called Rustamji Park is located next to the new secretariat. Local wildlife like the Red Pandas, the Himalayan Bears and several species of deer are housed in this park. A large statue of Lord Buddha with a burning butter lamp in front of the statue is also found in this park. Magnificent views of the surrounding mountains can be had from this park.

Jawaharlal Nehru Botanical Gardens close to Rumtek Monastery features several species of orchids and 50 different species of tree. The months from March to late May and from October to mid December are the best time to visit and experience this beautiful garden.

Situated at an altitude of 12,400 ft., about 40 km northeast of Gangtok on the Gangtok-Nathu-la Highway, Lake Tsongo – also called Lake Changu meaning ‘Source of the Lake` in Bhutia language – is a beautiful lake and is sacred to the local people. There is a small temple dedicated to Lord Shiv at the lake side. Dense alpine vegetation grows around the lake. The tourist department arranges tours to Lake Tsongo.

A natural 3 tiered cave, the Tseten Tashi cave is close to Lake Tsongo and can be explored for its beauty.

Lake Kechopari (meaning ‘Wishing Lake’) is on the bifurcation road between Gyalsing and Yoksum. Surrounded by mountains with thick forests and wild life, Lake Kechopari is a peaceful and serene lake. One can come to this lake to unwind and relax.

Lake Menmecho is about 20 km further from Changu Lake, nestling between the mountains below Jelapla Pass. Lake Menmecho is the source of River Ranpochu which merges into River Teesta. Trout fish are found in this lake. Tourists can stay at a Dak Bungalow or a tourist lodge near the lake for an overnight visit.

Located at an altitude of 14,200 ft. and a distance of 56 km from Gangtok, Nathula Pass borders India and China in the Tibetan plateau. Tourists on the Indian side of the border can watch Chinese soldiers and Chinese tourists on the other side.

Tashi View Point built by the late King of Sikkim Sri. Tashi Namgyal is about 8 km from Sikkim. Splendid views of Mount Siniolchu and Mount Kanchenjunga can be had from here.

Ganesh Tok is situated on a hillock on Gangtok-Nathula Road and at a distance of 7 km from Gangtok. A stunning bird’s eye view of Gangtok can be had from here. A small temple dedicated to Lord Ganesh is located at this place.

Just above Ganesh Tok is Hanuman Tok with gorgeous views of the mountains and Gangtok town. A temple dedicated to Lord Hanuman is present here.

Situated at an altitude of 12,000 ft., Yumthang Valley is surrounded by snow capped mountains with the valley floor covered with yellow flowers and violet primulas and the hills with colorful rhododendrons.

Gezing, the headquarters of West Sikkim District is a picturesque town located at an altitude of 2,700 ft. It lies at a distance of 15 km from the town of Legship and 110 km from Gangtok. Pemayangtse Monastery, Tashiding Monastery and Hin Shan Gompathan are some of the places to see around Gezing.

Nestling amidst rolling hills and serene lakes, Yuksom is a pretty town located just a few km from Gezing. Yuksom is the starting point for trekkers going to places like Dzongri and Goechala.

Jorethang is a bustling market town situated in the Rangeet Valley at an altitude of 300 m and about 30 km from Darjeeling. The Maghe Mela festival in Jorethang is a 3 day festival held on the 14th of January. It is celebrated just after the harvesting of crops. Cultural dances, beauty contest, hot air balloon show, marathon, fashion show and archery competition are some of the highlights of this festival. River rafting and paragliding are available for adventure loving people.

The charming town of Pelling is located at an altitude of 7,200 ft. and at a distance of 10 km from Gezing and 115 km from Gangtok. Pemayangtse Monastery, Sangachoeling Monastery, Rabdantsey Ruins and Sangay Waterfalls are some of the interesting places to see around Pelling.

Location: Gangtok is situated in the Shivalik Hills of the eastern Himalayan mountain ranges in the north eastern state of Sikkim in India.

Light woolens and tropical wear in summer and heavy woolens in winter are recommended.

Best Time to Travel: April to mid June and mid September to November is the best time to visit Gangtok.

By Road: National Highway 31A connects Gangtok to Siliguri (114 km) and the towns of Darjeeling and Kalimpong (the closest cities). Jeep, van and bus services are available from these towns to Gangtok. The distance from Gangtok to Kalimpong is 80 km, to Darjeeling is 94 km, to Siliguri is 114 km, to Pelling is 125 km and to Nathula is 56 km.