One of the most popular tourist destinations in India, Goa, a former Portuguese colony and the smallest state by area, is situated in the Western Ghats Mountain range in the Konkan region in the south western part of India. The capital of Goa is Panaji or Panjim. Sonsogor is the highest point in Goa with an altitude of 1,167 m or 3,827 ft.

The coastline around Goa measures 101 km or 63 miles. The state of Maharashtra borders Goa to the north and the state of Karnataka to the east and south. The western coast of Goa is formed by the Arabian Sea. 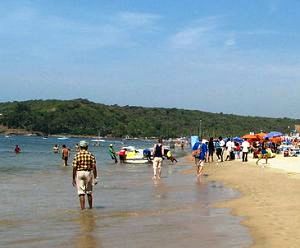 Goa was ranked first in terms of infrastructure and the best quality of life in India. Goa’s beaches, places of worship and world heritage architecture are well known all over the world and attract large number of Indian and foreign tourists every year. The important rivers flowing through Goa are Mandovi, Zuari, Terekhol, Chapora and Sal.

Goan cuisine is unique with pork dishes like Vindaloo, Xacuti and Sorpotel and a vegetable stew called Khatkhate. An idli-like snack known as Sannas and dosa-like snacks named Amboli are also unique to Goa. Feni is a popular Goan alcoholic beverage.

Here are some of the major attractions of tourist interest in Goa.

Goa State Museum is located in Panjim. The museum boasts of 8,000 artifacts in its collection such as stone sculptures, wooden objects, carvings, bronzes, paintings, manuscripts, rare coins and anthropological objects.

Situated in Bogmalo about 6 km from Vasco da Gama is the Naval Aviation Museum. This museum showcases the evolution of the naval and aviation forces. The museum is divided into 2 main parts, an Outdoor Exhibit and a 2 storey Indoor Gallery.

The Outdoor Exhibit is a large park displaying airplanes and helicopters such as the Sea Harrier, the Hawker Sea Hawk, the Breguet Alizé, the Lockheed L-1049G Super Constellation, the Short Sealand, the de Havilland Vampire, the HAL Chetak and the de Havilland Dove.

The Indoor Gallery gives information about key battles fought by the Indian Naval and Air Forces.

The Goa Science Center is situated on the New Marine Highway, Miramar, Panjim. The center has a large park with verdant lawns and beautiful flowers. Interactive exhibits explaining the laws of physics are found here. Some of the other attractions include daily science shows for young children, 3 D film shows and science demonstration lectures. A multimedia computer lab is also present at this center.

Situated on the Mandovi River, Miramar Beach is the most popular beach in Goa. It is a gorgeous beach with golden sand and encircled by palm trees. Large crowds of people flock to this beach.

Dona Paula Beach is located at a distance of 7 km from Panaji. Water scootering, motor boating, windsurfing, parasailing and water skiing are some of the attractions offered by this beach. Donal Paula Beach also has toboggan ski-biscuit, skibob, sports fishing, snorkeling, harpoon fishing, kayaking and yachting.

Cotigao Wildlife Sanctuary is the second largest wildlife sanctuary in Goa. The sanctuary is covered with thick forests and open grass lands. Some of the birds found here are the Indian Pied Hornbill, Larger Golden Backed Woodpecker and the Great Indian Woodpecker. Animals like the gazelles, sloth bears, porcupines, panthers, hyenas, wild boars and Indian bisons make their home in the Cotigao Wildlife Sanctuary.

Situated in the Bhagwan Mahavir Wild Life Sanctuary at Collem in South Goa along the Western Ghats and bordering the neighbouring State of Karnataka is the spectacular Dudh Sagar Waterfall. It is one of the highest waterfalls in India. The meaning of Dudh Sagar is Sea of Milk.

The Goa Carnival is held for 3 days in the month of February before Easter. Street plays, songs, dances, parades and feasting are some of the attractions of this carnival. The Goa Carnival was introduced by the Portuguese. The parades with several colorful and differently themed tableaus from all parts of Goa are a grand sight to see.

The Shigmotsav or Shigmo is a festival similar to Holi. This festival is celebrated by sprinkling coloured water and powders on people.

3. Procession of All Saints

Held in March/April in Old Goa, this is a picturesque procession where 30 statues of saints are brought out and paraded in the neighbouring villages around Old Goa.

A 2 day festival, the Goa Heritage Festival is held in Panaji. Its attractions include music, dancing and traditional food.

The International Film Festival of India is the largest film festival in India and is held in the month of November in Panaji. It showcases the best movies from all over the world.

The Feast of St Francis Xavier is held on December 3 in Old Goa with great festivity and celebration. A large number of people attend this feast.

7. Feast of Our Lady of the Immaculate Conception

The Feast of Our Lady of the Immaculate Conception takes place in Panaji on December 8. A large fair is held here to celebrate the occasion. A fair is held in Margao at the same time.

Location: Goa is the smallest state of India situated in the Western Ghats Mountain range in the Konkan region in the south western part of India.

Climate: For a large part of the year, Goa experiences a hot and humid climate. The summer season is from mid March to June, the rainy season from June to September and the winter season from late November to February.

Best Time to Travel: November to March is the best time to visit Goa.

By Sea:One can also take a catamaran from Mumbai to reach Panaji in 7 hours. (As per the recent reports this service seems to have been stopped).