Situated in the lush, verdant forests of the Aravali Mountains is the picturesque hill station of Mount Abu standing at an altitude 1,219 m. Located in the district of Sirohi, in the state of Rajasthan in western India, Mount Abu has the distinction of being the only hill station in Rajasthan. With lakes, waterfalls and green coniferous forests, Mount Abu entices nature lovers with its heart stirring beauty. 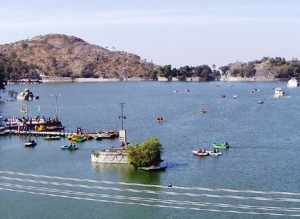 There are lot of places to visit and activities to indulge in. Here are the major ones:

Gaumukh Temple features a natural spring flowing through a carved cow’s head. The tank in this temple called Agni Kund is believed to be the site of the sacrificial fire made by Sage Vashistha. Statues of Sage Vashishtha, Rama and Krishna are found here. One can view the exquisitely carved hill temple of Arbuada from here. Close by is the superb marble statue of Nandi, the celestial bull.

Adhar Devi Temple is about 3 km from the town of Mount Abu and is chiseled out of a gigantic rock. It is reached climbing a flight of 360 stairs.

The Shiva Temple or Achaleshwar Mahadeva Temple in Achalgarh Fort built in the year 1412 features what is believed to be the toe of Shiva. There is also a brass Nandi or the celestial bull and 3 stone buffaloes standing around a pond at this temple. Several idols exquisitely carved out of crystal stone are found at this temple. The temple overlooks the beautiful Mandakini lake.

Shri Raghunathji Temple is close to the Nakki Lake. The temple houses a graceful image of the deity.

Located about 2.5 km northwest of Mount Abu on Ganesh Road is the Honeymoon Point (also called Anadara Point) at an altitude of 4,000 ft. It gives wonderful views of the green plains and valleys.

Situated within Raj Bhawan, Museum and Art Gallery is divided into 2 sections and has an interesting display of archaeological excavations from 8th to 12th centuries. Jain bronze carvings, miniature paintings, beautifully carved statues of Devdasis or dancers, brass works and a diorama of a local tribal hut are the other highlights of this museum.

Trevor’s Tank is named in honor of the British engineer who built it. Surrounded with densely forested hills, it is a bird watchers’ paradise. The hills are a refuge for birds like pigeons, peacocks and partridges.

Situated at the end of a plateau at a distance of 15 km from Mount Abu at an altitude of 1,722 m, Guru Shikhar is the highest point in Rajasthan. A small temple dedicated to Shiva and a temple of Dattatreya standing at the top are a must visit for the spiritually inclined.

The medieval monument of Achalgarh Fort is situated about 8 km from Mount Abu town and was built in the 14th century by Rana Kumbha of Mewar. The fort has enormous battlement walls offering stunning views of the surrounding countryside. Many magnificent Jain temples are located within the fort.

Here you will find a log hut on a mango tree and a hut built at ground level.

Mount Abu offers several stimulating jungle or nature trails for nature lovers. Some of them are Bailey’s Walk, Craig’s Walk, Palanpur Point, Tiger Trail, Trevor’s Tank, Arna Watch Tower, Salgaon Watch Tower, Walk to Village Cahndela, Walk to Gautam Rishi Ashram and Walk to Village Utroj. One can view a variety of birds, wildlife and flora of the region while trekking through these trails. You can also include rock climbing and rappelling in your trekking itinerary. Horse safaris are also available.

About half a mile long and a quarter mile wide, Nakki Lake is a charming artificial lake with depths ranging from 20 ft to 30 ft towards the west. There is a toad shaped rock appropriately called Toad Rock on a hill near the lake. Other rocks named after their shapes are Nun Rock, Nandi Rock and Camel Rock. Lake Nakki is popular as a picnic spot. One can have a pleasant boating experience in the lake or ride a horse around the lake.

Mount Abu celebrates the 3 day Summer Festival in May/June on the occasion of Budh Poornima. The festival starts with a ceremonial procession moving to the Nakki Lake Chowk. The festival comes alive with the Rajasthani and Gujarati folk performances and an exhilarating display of fireworks. Skating Race, Skater’s Show, CRPF Band Show, Boat Race, Horse Race, Tug of War and Panihari Matka Race are some of the other highlights of this electrifying festival.

The Winter Festival is celebrated in Mount Abu every year during the last week of December. The festival lasts for 3 days. Classical and folk singing, folk dancing and other cultural programs are organized during this festival. Water sports and cricket matches are also held. All the 3 days of the festival are marked with an amazing display of fireworks.

Location: Mount Abu is located in the Aravali Mountain Range in Sirohi District of Rajasthan State in Western India. It is about 58 km from Palanpur in Gujarat.

Climate: In summer, the temperature ranges from 23.3 °C to 33.8 °C and in winter from – 8 °C to 20.3 °C. The rainy season is from July to mid September. The average annual rainfall ranges from 153 cm to 177 cm. Light tropical cotton wear for summer and light woolen wear for winter are recommended.

Best time to travel: Mid-March to June and Mid-September to December is the best time to visit Mount Abu.

By Train: The nearest railway station to Mount Abu is Abu Road at a distance of 27 km southeast of Mount Abu. The Abu Road railway station has trains running to it from Ahmedabad, Jaipur, Mumbai, Jodhpur, Udaipur, Ajmer, Kotha, Indore, Bhopal, Gwalior, Jabalpur, Ujjain, Delhi, Mumbai, Kolkata, Chennai, Hyderabad, Bangalore and Pune. On reaching Mount Abu Road, one can take a taxi or a jeep to reach Mount Abu.

By Road: Mount Abu has a good road network connecting to Delhi, Ajmer, Bundi, Jaipur, Abu Road, Achalgarh, Ahmedabad, Ranakpur and Udaipur. One can take a bus or car from these places to Mount Abu. Mount Abu is 214 km from Ahmedabad, 835 km from Mumbai, 768 km from Delhi, 515 km from Jaipur, 182 km from Udaipur, 291 km from Jodhpur and 168 km from Ranakpur.