Blessed with verdant meadows, gurgling streams and cascading waterfalls, the saucer shaped valley of Pachmarhi (meaning 5 caves) is a beautiful hill station situated in the Satpura Mountain Range in the state of Madhya Pradesh in India. The hill station is at an altitude of 3,550 ft and is popularly called ‘Queen of Satpura’. 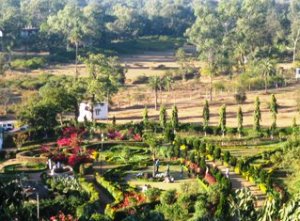 You will never fall short of places to visit or activities to indulge in. Here are the major ones:

Apsara Vihar Falls or Fairy Pool is a charming bathing pool formed by a tiny waterfall, close to the Pandava Caves. The place is popular as a picnic spot. Swimming and diving in the pool are other popular activities.

The Bastar Dussehra festival is celebrated with great pomp in the months of September and October with the Navaratri celebrations lasting for 9 days. The festival culminates in a grand procession.

Also called Jamnua Prapat, Bee Falls is an enchanting falls and the source of drinking water to the town of Pachmarhi. Bathing pools above the falls provide another attraction for bathers. This is a marvelous place for picnic.

Bison Lodge, constructed in the year 1862 is the oldest house in Pachmarhi. There is a museum here now with displays of plants and animals endemic to Pachmarhi. Interesting exhibits include stuffed tigers, an enormous stuffed bison, striking photographs of Pachmarhi and wood samples.

The Catholic Church features French and Irish architecture. The church also has beautiful Belgian stained glass windows. Several fallen soldiers of the First and Second World War are buried in the church cemetery.

Chauragarh Peak is located at a height above sea level of 1,326 m. Scenic views of the dense forests, valleys and hills can be had from here. The temple of Lord Mahadev is situated on top of the hill and one has to climb 1,250 steps to reach here. The temple attracts hordes of devotees during the festival of Maha Shivratri. The courtyard of the temple has several tridents or trishuls in it.

Chhota Mahadeo is a cave situated at Village Tamia at a distance of 32 miles from Chhindwara on the Chhindwara – Pachmari Road. This is considered to be a holy place with a Shivalingam in it and is surrounded by rocks overhanging a stream and a spring. The water from the spring plunges down as a steep waterfall.

The Chieftain’s Cave is named after a painting depicting a battle scene with 2 chieftains on horses.

Dating back to the year 1875, Christ Church is a fascinating church with its ‘sanctum-sanctorum’ featuring a hemispherical dome on top with ribs ending with faces of angels. The church also has stained glass windows, a brass baptismal font and a bell. The chimes of the bell can be heard from afar.

Dhupgarh is the highest point in the Satpura range at an altitude of 4,429 ft with beautiful views of the rising and setting sun, valleys and ravines. Dhupgarh is a favourite spot for picnickers.

Plunging down into 3 different falls from a height of 100 m, Duchess Falls also called Ramaya Kund or Irene Pool are magnificent falls situated in the Satpura Mountain Range. The base of the waterfalls has several pools which are quite safe for bathing and swimming.

Handi Khoh is a magnificent ravine with a 300 ft high cliff and surrounded by thick lush forests. The cliff is host to several big beehives. Superb scenery is another attraction of Handi Khoh Ravine.

Harper’s Cave is close to Jata Shankar Cave. It is named after one of its paintings in which a man is seated, playing a harp.

Indira Priyadarshini Point also known as Forsythe Point, has heart stopping views of Pachmarhi and the Handi Khoh ravine. One can also have fabulous views of the setting sun against the backdrop of the Satpura Mountain Range.

Situated north of Pachmarhi in a deep ravine, Jata Shankar Cave is a natural cave with a stalagmite inside the cave in the form of a Shivalingam. A rock formation resembling the hundred headed divine snake Seshnag is found in the cave. There are 2 spring fed ponds in the vicinity of the caves, one being a cold water spring and the other a hot water spring.

Kites Crag features magnificent cave paintings which are in white or outlined in red.

Mahadeo Hill is a sandstone hill in the Satpura Range at a height of 1,363 m above sea level. There is a very old temple here dedicated to Lord Shiva. This temple has an impressive idol of Lord Shiva and a Shivalingam. On the eastern side of the hill is a cave with several magnificent cave paintings. There is also a pond for devotees to dip into.

Five rock cut caves comprise the Pandava Caves in which the Pandavas are believed to have sheltered during their exile. These 5 caves are located on a sandstone hillock. The Pandava Caves housed Buddhist monks in the first century. The biggest and most ventilated cave is named ‘Draupadi Kuti’ and the darkest cave is called ‘Bhim Kothari’.

Reechhgarh or Fortress of the Bears is a cave in the shape of an amphitheater with an entrance, an exit and a central podium.

Sangam also known as Fuller’s Khud or Waters Meet is the lowest of picnic spots on the Denwa Stream. There are several bathing pools here.

Covering a vast area of 524 square km, Satpura National Park is a part of the Central Indian Highland Ecosystem and boasts of a wide variety of birds and animals. Wildlife includes bison, tigers, leopards and 4 horned deer. Thick evergreen forests of sal, teak and bamboo can be found here. The park features rivulets, waterfalls, an enormous reservoir, sandstone mountains, deep gorges and ravines.

Silver Falls is also called Rajat Prapat or Big Falls and is a 10 minute walk from Apsara Vihar. The falls is in the shape of a horsetail and plunges down from a height of 351 ft.

Sunder Kund also known as Saunder’s Pool is reached by crossing a stream below Duchess Falls and walking on a footpath in a south westerly direction for a distance of 2.5 km. This pool is popular with swimmers.

Tridhara or Piccadilly Circus is a beautiful place where 2 streams meet in a junction. This place is ideal for picnics.

Vanshree Vihar also known as Pansy Pool is a pretty pool found on the Denwa Stream and surrounded by ferns, semi-tropical vegetation and trees. This is another place popular with picnickers.

Location: Pachmarhi is situated in the Satpura Mountain Range of Madhya Pradesh State in India.

Best Time to Travel: April to July is the best time to visit Pachmarhi.

By flight: The nearest airport to Pachmarhi is Bhopal at a distance of 210 km. There are regular flights to Delhi, Gwalior, Indore and Mumbai from Bhopal.

By Train: The nearest rail head to Pachmarhi is Pipariya at a distance of 47 km. Trains run from Pipariya to major Indian cities like Chennai, Mumbai, Delhi and Bangalore.