The turbulent political and historical baggage that this city means can be fascinating for any traveler. But it is the isolation, the spectacular location and the stunning cityscapes as well as the surrounding landscapes that make Lhasa a holiday destination like no other. Lhasa means land of the Gods and is the heart of the Tibet – known as an autonomous region of China. Thousands of miles away in the mountain state of Himachal Pradesh in India, Tibetans who have escaped the cultural and political imperialism of the Chinese continue to wage their silent war for independence from the Chinese monolith.

So in this city you will find Chinese style shops and stores much like any other Chinese city – but you will also find proud people clinging to their language, way of life and intrinsic culture even in the face of the Chinese invasions – cultural, political and every other kind. 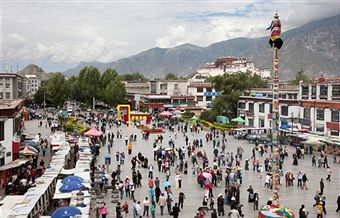 Lhasa has many attractions the like of which would please any tourist. Hotels, restaurants, travel resources aplenty mean that this is a fascinating holiday destination. Travelers who favor monasteries will have a much to marvel at. The Drepung monastery is the biggest and can sometimes house as many as ten thousand monks. The Jokhang monastery is the most important and sacred of temples for the Tibetan people. It is a marvelous blend of Indian, Chinese and Nepalese architectural styles.

The historic Potala Palace dating back to the 17th century stands tall and majestic on the crest of a hill rising from the old city. It was the former seat of the Dalai Lama and even today contains the shrines of past Dalai Lamas. Built more like a fortress, the palace encompasses several palaces within itself. It is something of a symbol of the city itself and now houses a museum.

Because of the political situation that exists, all non-Chinese nationals are required to obtain a special permit to visit Tibet. Rather than individual permits, group permits of 5 or more people are recommended to obtained. Lhasa is connected by air to many important Chinese cities and can also be reached from Kathmandu in Nepal. It can also be reached by rail from areas of China and by bus from Kathmandu. At an elevation of 12,000 feet above sea level, the city can pose the risk of significant altitude sickness which travelers should beware of.