The city of Edinburgh is not just the capital of Scotland, it’s in fact the world capital of comedy. Be it festivals, clubs, theaters, playhouses or pubs, comedy marks its presence everywhere in Edinburgh. Here is a handpicked list of leading clubs that offer the best in comedy, from famous faces and rising stars alike.

The Edinburgh Festival always includes memorable comedy performances, and the Edinburgh Festival Theatre’s line-up follows a similar vein. The current theatre building is an impressive modern structure built in 1994. However, it stands on the oldest continuous theatre site in the city, which has seen a huge range of comedy greats perform, from Laurel and Hardy to John Cleese. It also boasts the largest stage in Scotland, which continues to regularly host some of the best comedy acts on the circuit.

2. The Jekyll and Hyde 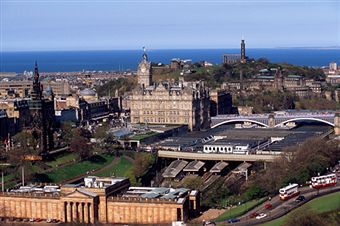 The aptly named Jekyll and Hyde pub isn’t for everybody, but it is one of the best venues for those who take their comedy black. It is owned by the Eerie Pub Company, and one of its main attractions is an atmosphere reminiscent of gothic horror novels. The Jekyll and Hyde hosts regular stand-up comedy shows, and in keeping with the pub’s theme these have distinctly dark undertones. Overall, it is perfect venue for discovering hidden gems in the darker side of the alternative comedy scene.

The Stand is a well-known comedy club in the centre of Edinburgh, which offers a range of unique shows daily. Being a dedicated comedy club, it hosts a great variety of performances running the full range of conventional and alternative comedy styles. It began life in a pub basement in 1995, with the idea of offering a venue to comedians when most other stages were occupied by the Edinburgh Festival. The success of that experiment has led it to become a leading comedy club, and open further premises in other cities.

The Edinburgh Playhouse is a large and impressive venue that dates back to 1929. It was designed and built as a theatre, but originally opened as a cinema instead. This closed in the 1970s, and after a campaign to save it from being turned into office blocks it was reopened as the theatre that was originally planned. Today, it hosts a range of the best and biggest shows, including a wide range of comedy plays and stand-up routines.

The Bedlam Theatre is one of the most unique venues around. It is housed in a listed neo-gothic former church in the very heart of Edinburgh, and is run and maintained entirely by students. It may not be the best place to catch leading, established comedians, but it is a fantastic place to see something different and catch some of the rising stars of Edinburgh’s thriving comedy scene. A number of famous faces started out there, including Miles Jupp, who appears in Rev and The Thick of It, and The Penny Dreadfuls who are now known for attracting great acclaim at the Edinburgh Fringe.

Edinburgh is a major tourist destination, with hotels near Princess Street and other important areas doing constant good business. Alongside its many well-known attractions, it is also an excellent place for comedy lovers to visit.