Mountains, lakes, rivers, snow clad peaks, the undulating countryside dotted with utterly charming towns and cities that are among the most modern in the world. Whatever it is that your heart desires – sightseeing, skiing, shopping… Switzerland has it all and more! It is one of the most sought after holiday destinations in the world, and with good reasons. Here are some of the main attractions of this breathtakingly beautiful country. 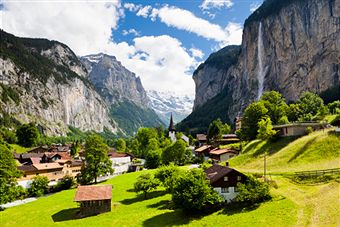 The Swiss Alps are not only famous; they are possibly the most photographed in the world. Then there are the lakes, rivers, and the lush countryside to take in. Countless movies have been shot in the stunning locales of this country not only because of the stunning locales but also because of a neutral, charming and hospitable country and its people.

Though tiny by most estimates, the country has a unique geographical position that determines is language and culture. Sharing borders with France, Germany and Italy means that Switzerland has three distinct linguistic and cultural regions as well.

There is little of the mad hurly burly of city skyscrapers even in the big cities of of this country even though cities such as Zurich are one of the most important economic hubs in the world. The architecture here consists of charming chalets, rustic homesteads and contemporary dwellings as well.

Hmmm… Swiss Chocolate! It goes beyond just Lindt and Lindor – One need say no more!

The skiing is truly spectacular here, with people arriving from all over the world to enjoy the crisp snow and the bracing air here. And if you want to go celebrity spotting, the slopes in Switzerland may be the very place.

Thermal springs have been around forever here and how the world class spas offer you a level of care and pampering to soothe the most jaded traveler of all.

The government and the people here want to keep their country unpolluted and unspoiled which is why public transport and cycling and other forms of non-motorized transport are encouraged, thus making it an environmentally friendly choice.