In addition to the outstanding architecture, Cambridge is notable for its peaceful medieval streets, well-maintained gardens and awesome bridges. Daily Guided Tours are conducted including a Historic Tour, a Science Tour, an Architectural Tour, a Ghost Tour and a General Sightseeing Tour. Exploring Cambridge town on hired bicycles or taking sightseeing bus tours is a good idea. 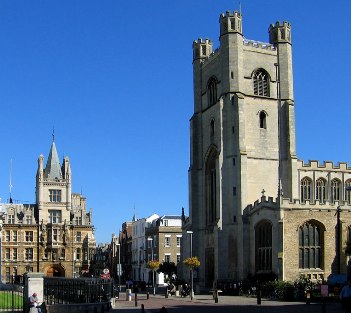 Here are few of the many wonderful places to visit:

The picturesque River Cam flows through the centre of Cambridge town and provides boating facilities. Cambridge University Boat Club organizes 2 bumps races in the Lent and Summer terms. Recreational punting, powered boating, canoeing, kayaking and sailing are popular on the River Cam. Swimming on the upper reaches of the river is another attraction.

The Cambridge Corn Exchange holding 1800 standing or 1200 seated is located on the corner of Wheeler Street and Corn Exchange Street. It hosts a variety of theatre, dance and music performances.

The ADC Theatre is situated in Park Street, north off Jesus Lane and is the oldest playhouse in the United Kingdom. It can seat 228 persons.

The Mumford Theatre located on East Road offers a varied fare such as professional touring, local community and student theatre.

The Cambridge Midsummer Fair on Midsummer Common dating back to the 13th century is one of the oldest fairs in the country. With live music, rides, a comedy marquee and several market stalls, it is well worth a visit.

The Strawberry Fair takes place in June on the Midsummer Common. It is a free fair providing a variety of music and entertainment. Several arts and crafts are showcased here. There is a separate entertainment area for children. Short films screened at this fair are another attraction.

The Cambridge Beer Festival is the second largest such festival outside London and is held on Jesus Green in May. It serves real ales, ciders, perries, beers and country wines. Several thousand pints of beer are consumed at this festival every year. There is also a stall selling a variety of traditional cheeses and breads, olives, pickled eggs, pork pies and Scotch eggs.

Whipple Museum of the History of Science: Whipple Museum of the History of Science is in Free School Lane and displays scientific instruments, apparatus, models, pictures, prints, photographs, books and other material related to the history of science dating from the 14th century to the 19th century. Instruments used in the study and practice of astronomy, electricity, mathematics, medicine, microscopy, navigation, optics and general science are shown here.

Wysing Arts Centre: Wysing Arts Centre on Fox Road is a research and development centre for the visual arts. Attractions here include a 17th century farmhouse, studio building and a huge gallery.

All Saints Church: All Saints Church is built in the Gothic revival style of architecture in the year 1871 and is situated in Jesus Lane. It has a magnificent decorated interior and beautiful fittings.

Clare College: Located in Trinity Lane, Clare College is the second oldest college in Cambridge. It has pretty gardens, a renaissance style court and the oldest surviving river bridge. Hugh Latimer, the Protestant Reformer was a student here.

Clare Hall: Clare Hall is on Herschel Road and is the smallest of Cambridge colleges. Its facilities include a sports complex with a multi gymnasium, a swimming pool and a tennis court.

Corpus Christi: Corpus Christi was founded in the year 1352 and is situated on King’s Parade. It has a beautiful medieval court and houses the Grasshopper Clock. Christopher Marlowe the famous dramatist and poet who studied here.

Darwin College: Darwin College in Silver Street was named after Charles Darwin. Every year the Darwin lectures, a series of talks based on a single theme are given by eminent people specialized in their fields.

Fitzwilliam College: Fitzwilliam College in Huntingdon Road has a grand dining hall. It also has a chapel built in the modern style, magnificent gardens and a new library whose tower is the highest point in Cambridge.

Grasshopper Clock: Situated in Corpus Christi College, the Grasshopper Clock is a strange looking clock with a 24 carat gold dial and a metal grasshopper or Chronophage. It took more than two hundred engineers, sculptors, scientists, jewellers and calligraphers a period of seven years to make this clock. This clock is featured in the Indian Movie – Paa.

King’s College Chapel: King’s College Chapel located on King’s Parade is the biggest of all college chapels in Cambridge. This chapel provides a unique example of perpendicular or late gothic architecture and has the distinction of having the largest fan vault ceiling in the world.

Magdalene College: Founded in 1542 by the Lord Chancellor of Henry VIII, Thomas, Baron Audley of Walden, Magdalene College is situated on Magdalene Street. The library has a collection of 3000 books of Samuel Pepys including his famous diaries.

Queens’ College: Located on Silver Street, Queens’ College houses the unique wooden Mathematical Bridge. The President’s Lodge belonging to the 16th century is a beautiful half-timbered building. The first Greek teacher at the University, Erasmus of Rotterdam was a former member of Queen’s College.

Robinson College: On Grange Road is the most recent of all colleges in Cambridge, Robinson College founded in 1977. Its chapel features two beautiful stained glass windows designed by John Piper.

Selwyn College: Founded in 1882 in memory of George Augustus Selwyn who rowed in the first Cambridge/Oxford Boat Race as a crew member, Selwyn College is situated on Grange Road.

Senate House: Situated on Senate House Passage or King’s Parade, the Senate House was built in the years 1772 to 1730 in the classical style and is the parliament building of Cambridge University.

St Bene’t’s Church: The Anglo-Saxon Church of St Bene’t’s has the distinction of being the oldest building in the county of Cambridgeshire with the tower, nave & chancel dating back to the year 1040. It is located on Bene’t’ Street.

St Edward’s Church: St Edward’s church is an Anglo-Saxon church named after King Edward the Martyr and is situated on Peas Hill. It dates back to the year 1400. St Edward’s Church is called the cradle of the English Reformation as Hugh Latimer, Bilney & Barnes were associated with this church.

St John’s College: St John’s College is a Tudor college founded by Lady Margaret Beaufort the mother of King Henry VII. It is located on St John’s Street. The college features a neo-gothic Bridge of Sighs and an awe inspiring tower in its chapel. Wordsworth and Wilberforce were former students in this college.

Wolfson College: Wolfson is found on Barton Road and is one of five graduate colleges in Cambridge. The buildings are grouped around 2 main courts.

Emmanuel College Gardens: Emmanuel College Gardens date back to the year 1584 and are one of the largest gardens in Cambridge. The Fellows’ Garden displays an enormous copper beech tree, an oriental plane tree which is 200 years old and a small oak tree planted by Queen Elizabeth II to celebrate 400 years of the college existence.

Parker’s Piece: Parker’s Piece is an open ground in Parkside. Basic football association rules were formed in the 19th century in this place.

The Cambridge Backs: A stretch of reclaimed land behind the riverside colleges, the Cambridge Backs is situated on Queen’s Road. The scenery around this area is breathtaking. In spring the Backs are covered with beautiful daffodils and crocuses.

Anglesey Abbey, Gardens and Lode Mill: Located on Quy Road, Anglesey Abbey is a recreated early 20th century luxury home. Some of the attractions here include an oak room with 17th century carved oak panels and an 18th century stone fireplace, a dining room with a 16th century walnut refectory table, a collection of 37 quaint clocks, a painted chestnut Madonna, jeweled crosses and a mirrored library with more than 4000 books. Anglesey Abbey Gardens is a fabulous place to explore with a collection of classical sculpture, a winter garden with wildflower meadows and shrubs such as Viburnum, Mahonia, Sarcococca and Chimonanthus. The Lode Mill built in the 18th century and restored in 1982 is a working mill.

Duxford Imperial War Museum: Located about 10 miles from Cambridge, Duxford Imperial War Museum is an interesting place to visit for aviation enthusiasts. It traces the history of aviation in Britain and the Commonwealth. The Aircraft Hall has over 30 exhibits of British and Commonwealth military and civilian aircraft. An interesting maritime collection is on display here.

Local Nature Reserves (LNR’s): The Local Nature Reserves (LNR’s) in Cambridge are reserves for the protection of the wildlife habitats and geographical features of Cambridge. There are 8 LNRs where nature can be studied and enjoyed. The Paradise LNR is situated to the south west of Sheep’s Green and Lammas Land Recreation Ground on the west bank of the River Cam. It is a pretty woodland with a central marsh area, wet woodland and several riverside willow trees.

Location: Cambridge lies on the east bank of the River Cam in East Anglia in the county of Cambridgeshire and is at a distance of 50 miles north of London.

Best time to travel: The first week of June

The international airports in London such as Stansted, Luton, Heathrow, City Airport and Gatwick are well connected with regular bus and rail services to Cambridge town. Stansted is the closest important airport to Cambirdge.