The scenic market town of Stratford-upon-Avon, located on the River Avon in south Warwickshire in England, is the birthplace of the renowned literary giant, William Shakespeare. This immensely beautiful little town, steeped in culture and history, gives visitors a taste of old England. Few of the streets here still mirror the centuries old charm as if time didn’t move at all. 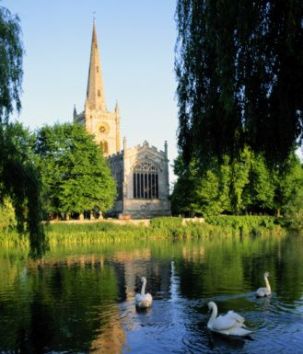 Here are the major attractions of Stratford-Upon-Avon you can’t afford to miss.

Anne Hathaway’s Cottage, the home of Shakespeare’s wife before she married him, is in the village of Shottery at a distance of 1 mile from Stratford-upon-Avon. This is a beautiful thatched and timber framed farmhouse with 12 large rooms, rare furniture such as a carved oak bed and sprawling gardens.

Shakespeare’s Birthplace is a faithfully restored half timbered house in Henley Street. William Shakespeare was born in this house in 1564 and grew up here. The Birthplace displays domestic furnishings from that period, a glass window with visitors’ signatures to the house over a span of time and John Shakespeare’s glove making workshop. There is a pretty walled garden at the back of the house planted with flowers and herbs familiar in Shakespeare’s time.

Nash’s House was owned by Shakespeare’s granddaughter, Elizabeth and is now a museum of the history of the Avon Valley community up to the time of William Shakespeare. It also displays fascinating Elizabethan furniture and tapestries. New Place, where Shakespeare spent his final years, is next door to Nash’s House. Both, Nash’s House and New Place are on Chapel Street.

Situated on High Street, Harvard House is an Elizabethan house and was the home of John Harvard’s mother, the founder of the famous Harvard University. Harvard House is now the Museum of British Pewter and displays items from the Roman period to the early 20th century.

Located on Church Street or Chapel lane, Old Grammar School boasts of William Shakespeare being one of its most illustrious students.

Bancroft Gardens are situated on the River Avon beside the Royal Shakespeare Theatre. Attractions here include a human sundial celebrating the Warwickshire Fire and Rescue Service, 2 bridges over the canal basin and the lock, a swan fountain and the Gower memorial. The statues of William Shakespeare and Shakespearean characters of Hamlet, Lady Macbeth, Falstaff and Prince Hal can also be seen.

Hall’s Croft was the home of Shakespeare’s eldest daughter Susanna and her husband Dr John Hall. It has an interesting collection of 16th century and 17th century paintings and furniture. Exhibits regarding Dr. John Hall and the medical practices of the period are also displayed here.

Mary Arden’s House, also known as Mary Arden’s Farm is the farmhouse of Shakespeare’s mother. It is situated about 3 miles from Stratford-upon-Avon in the village of Wilmcote. Mary Arden’s House offers a peep into Tudor times with the baking of the daily bread and tending the kitchen garden. There are rare breed of pigs, cattle and sheep here and awe inspiring falconry displays. Palmer’s Farm is beside Mary Arden’s House.

10. Waterside and the Canal Basin

The Canal Basin is located in the Bancroft Gardens alongside the Waterside leading to the Royal Shakespeare Theatre. Several pleasure boats can be seen moored here.

The famous Royal Shakespeare Company (RSC) is situated at Waterside and performs works by Shakespeare, other renaissance playwrights and modern authors. Backstage tours are conducted often.

Located on Rothers Street, Farmer’s Market is a twice monthly affair. Delicious buffalo cheese, cakes, bread and sausages are sold in the market. One can have a view of the scenic agricultural landscape of Warwickshire from here.

Located in Southern Lane, Holy Trinity Church holds the graves of William Shakespeare, his wife Anne Hathaway, Dr. John Hall and his wife Susanna Shakespeare and Thomas Nash. It is the oldest building in Stratford-upon-Avon. Holy Trinity Church features a 14th-century sanctuary knocker in the porch of the church and misericord seats in the chancel belonging to the 15th century adorned with religious and secular carvings. Several huge beautiful stained glass windows with important English and Biblical saints can be seen in this church.

The Civic Hall is on Rother Street and hosts many concerts, dramas, music performances, exhibitions and community events.

Rowing boats and motor boats can be hired for an enchanting boating experience on the River Avon. River cruises are also available. There is a restaurant cruiser where one can have a delightful meal along the banks of the River Avon. Exciting river races are held every summer. Walking along the river side in itself is a pleasant and restful experience.

Located on Sheep Street, Shrieve’s House is one of the oldest structures in Stratford-upon-Avon and is said to be haunted by several ghosts. It is believed that William Shakespeare based his character of Sir John Falstaff on one of the residents of this house. Oliver Cromwell may have stayed here in 1651.

The Falstaff’s Experience Museum is located in a barn of Shrieve’s House on Sheep Street. The museum displays information related to the Civil war, the secret chambers, the myths, hidden priest holes, historic facts and legends.

Stratford-upon-Avon Racecourse is on Luddington Road. Racing has taken place here for more than 250 years.

There is a brilliant display of Christmas lights in Stratford-upon-Avon during Christmas time and the New Year. Each street in the town has a different color and theme. The lights provide a stunning backdrop to the town’s events.

Located in Swan’s Nest Lane, the Stratford Butterfly Farm is the largest exhibition of its type in the United Kingdom. Several species of free flying colorful butterflies and free flying birds can be seen in the farm. The Butterfly Farm has 3 main areas: the Caterpillar Room, Insect City and Arachnoland. The Caterpillar Room has a collection of caterpillars, pupas, eggs and special plants for breeding butterflies. The Insect City exhibits insects such as beetles, praying mantis, stick insects and giant millipedes in glass cases. Snails and crabs are also found in the Insect City. Arachnoland has 15 spider species including black widows, tarantulas and Goliath Bird Eaters. Arachnoland also houses scorpions.

Located in Gospel Oak Lane, Pathlow, the Stratford Armouries is an Arms and Armoury Museum. The displays here include more than 500 year old cannon, a life size armored Indian elephant, a jade dagger belonging to Lawrence of Arabia and a huge crossbow based on Leonardo Da Vinci’s design. There is also a large themed play barn and an adjacent outdoor fort for young children.

Stratford Leisure and Visitor Centre is situated at Bridgefoot. It has 2 dance studios, a health suite and sun beds, 8 badminton courts, a 6 lane main pool, a teaching pool, a fitness studio, a crèche and nursery, 4 all weather pitches and an art gallery.

Other popular destinations around Stratford-upon-Avon include the Forest of Arden, Warwick Castle, Kenilworth Castle, Charlecote Park, the towns of Henley-in-Arden, Bidford on Avon and Chipping Campden, and the villages of Ilmington and Welford-on-Avon. One can easily travel to these places by car or bus. The Forest of Arden can also be explored via the Stratford to Birmingham railway.

Temperature: Average temperature in January is 6°C and in July 22°C.

The nearest airport is in Coventry which is 18 miles away while Birmingham airport is 27 miles from Stratford-upon-Avon.