Spread across 550 square miles amidst the sparkling blue waters of the Pacific Ocean, Kauai is the fourth largest island in the Hawaiian archipelago. This lush green tropical island, said to be formed some 6 millions years ago, is also the oldest of the main Hawaiian Islands.  Known for its heavenly beaches and charming little towns, Kauai is also called The Garden Isle. 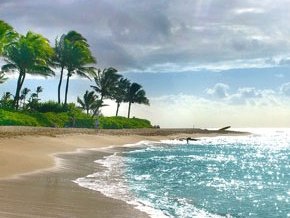 Here are the major attractions of Kauai Island.

Napali Coast is situated on northwest side of Kauai. Accessible only by hiking, boats or helicopters, Napali Coast is a paradise with stunning scenery.

Also called as ‘The Grand Canyon of the Pacific’, Waimea Canyon is located on Kauai’s west side. It is as long as 14 miles, as wide as 1 mile and as deep as 3600 ft. Spectacular and dramatic views of crested buttes, steep cliffs and ravines can be had from Waimea Canyon.

Wailua River is the only river which is navigable in Hawaii. Kayaking and water skiing are the popular sports available here. Other attractions along the Wailua River include Fern Grotto, a bird sanctuary, Halokila Hawaiian Village, a pool for rope jumping and Secret Falls.

Polihale State Park is situated on the western end of Kauai. Camping is popular here.

Hanalei Town, located on Kauai’s North shore and west of Princeville has several taro farms and art galleries. One can have a pleasing view of the pretty Hanalei Bay from The Hanalei Pier. The art galleries showcase Kauai art and carvings of native Hawaiian woods. The Hanalei Community Center holds ukulele concerts – a must for music lovers. Also visit the historical site at The Waioli Mission House.

Wailua Falls is located north of Lihue and plunges from a height of 80 ft. The opening credits of the popular television show ‘Fantasy Island’ was shot here.

Situated on Lawai Road, Poipu, Spouting Horn Park boasts of a blow hole which shoots salt water to a height of 50 ft. At sunset, this spray forms a colorful rainbow. There is a protected overlook which gives a spectacular view.

Situated on the south coast, Hanapepe Town is called the art capital of Kauai. The movies “The Thornbirds” and the “Flight of the Intruder” were shot here.

Situated on Kuamoo Road, Wailua, East Kauai, Opaekaa Falls is part of the Wailua River and is the most easily accessible of all major waterfalls in the island of Kauai. It plunges from a depth of 151 ft. The old temple of Poliahu Heiau is found near here.

The northernmost point of the main Hawaiian Islands, Kilauea Lighthouse is situated on a narrow peninsula and gives breath taking views of the ocean and cliffs.

Kilauea Point National Wildlife Refuge is close to Kilauea Lighthouse and has several nesting seabirds like the Red-Footed Boobies, the Laysan Albatross, and the Great Frigate bird.

Best time to travel: Kauai has mild temperature throughout the year. December to March is the high season when prices are up and hotels are booked to capacity. April to June (spring) and September to October (fall) are the off seasons, when the best bargain is available.

Accomodation: Kauai gives you a wide range of choices of luxury resorts, condominiums and bread & breakfast.

One can fly directly to Kauai’s main airport, Lihue Airport (LIH) or alternately fly to Honolulu International Airport (HNL) on Oahu and then go to Kauai.