The comma shaped tiny Hawaiian island of Lanai is just 18 miles wide and 13 miles long. Due to its dedication to growing pineapples in the past, Lanai is also known as The Pineapple Isle. Away from the busy traffic, crowded malls and neon lights, the secluded island of Lanai will give your visit a romantic touch with its unexplored beaches and unspoiled surroundings. Lanai still holds the old Hawaii feel in its air. You can indulge in golf, snorkel, scuba or just set out on a journey to explore the remote beaches. 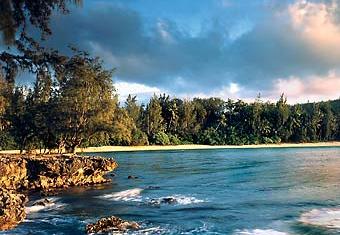 Here are some of the major attractions of Lanai Island.

Hulopoe Bay is on the southern coast of Lanai. Big tide pools are found on the eastern part of the bay. Spinner dolphins and humpback whales can be seen in the bay.

Kaiolohia or the Shipwreck Beach is on Lanai’s northeast coast. It has wrecked several ships along its rocky channel. One can have a clear view of Molokai and Maui from Kaiolohia.

3. Keahiakawelo or the Garden of the Gods

Keahiakawelo or the Garden of the Gods is a natural rock garden. It is about 45 minutes from Lanai City, at the end of Polihua Road.

Lanai City is in the heart of the island of Lanai. It’s a small settlement and has several old plantation houses.

Munro Trail is an off-road trail leading to Mount Lanaihale. At 3370 ft, Mount Lanaihale is the highest point in Lanai. Eucalyptus, Norfolk pines and ironwoods are some of the pretty trees found here.

Polihua Beach is the longest white sandy beach in Lanai. On windless days, one can picnic, take pictures and sunbathe here. On a clear day, Molokai and Oahu’s Diamond Head Crater are sometimes visible from here.

Between Hulopoe Bay and Manele Bay is Puu Pehe or Sweetheart Rock. Spectacular sunsets and stunning Hulopoe Bay can be seen from here. Sometimes Spinner dolphins can also be seen swimming in the waters below.

Location: Polynesia, near the center of the Pacific Ocean, just below the Tropic of Cancer, Hawaii State, USA

Best time to travel: Anytime of the year. Trade winds make Lanai enjoyable all through the year. Whale watching season is from December to May.

Lanai has its own airport. From Honolulu International Airport (HNL) or Kahului Airport (OGG) in Maui, one can fly to Lanai Airport (LNY).