There are a number of tourist attractions in New York City and it’s virtually impossible to visit them all during one trip. In fact several trips to this magnificent city still might not be enough to view all of the exceptional sites and neighborhoods. However, you will definitely have a better chance at visiting as many as you can by taking one of numerous New York double-decker bus tours that are available in the city.

There are several types of tours available including straight tours, hop-on and hop-off tours and day-pass tours which allow you to ride the bus for a specific number of days. This is an ideal way to visit as many attractions as you like and save time and money at the same time. The hop-on and hop-off double-decker tours are generally considered to be the most popular. With these, you can get off at any of the stops and explore the attractions and then catch the next bus when you are ready to move on. You can do this since there are numerous buses that operate along the same route all day long. 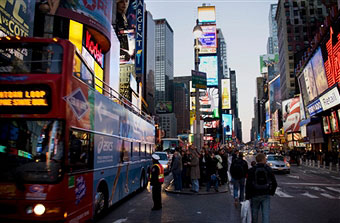 This type of tour basically gives you unlimited on and off privileges over the entire length of the tour pass. For instance, a one, two, three, or seven-day pass allows you to take the bus wherever it goes for that time period. There are several tour routes to choose from as each one covers a specific area of the city, such as downtown, uptown, Harlem, and Brooklyn. Night tours are also available from most tour companies.

You’ll be able to view all of the city’s most historic, famous, and popular sites. These include places such as the Theater District, Carnegie Hall, Times Square, the Empire State Building, the Flatiron District, Union Square, Greenwich Village, SoHo, Macy’s, Broadway, Little Italy, Chinatown, Battery Park, the Ellis Island Ferry, the Statue of Liberty, the United Nations, Rockefeller Center, Madison Square Garden, the Financial District, Wall Street, the South Street Seaport, and the site of the World Trade Center.

Not all bus tours are of the hop-on and hop-off variety. You’ll find that there are also tours which last for a few hours and take you past numerous sites. Some of these buses stop and allow passengers to get off and explore the attraction and then after a certain time period they will get back on the same bus and move on to the next destination. Most bus tours offer guides who give you the history of the attraction or the audio is provided via earphones. Several languages are usually available and most of the buses are open-topped in warm-weather months, meaning there’s no roof on the upper deck.

The cost of New York double-decker bus tours will depend on your age, how long your pass is and which company you use. You will notice that the costs will vary from one tour operator to another. You’ll also be able to purchase a bus tour as a part of the New York Pass. This is a credit-card type pass which allows you entry into many of New York’s hottest attractions and offers discounts on some shops and restaurant. The pass is available in one, two, three and seven-day formats and one price covers everything. The pass also means you don’t have to stand in ticket lines to your favorite New York attractions.