The Great Pyramid of Giza is regarded to be one of the seven wonders of the ancient world and is in fact the last one of them that still stands today. The amazing building is recognized as being the world’s most massive as it’s made out of 2.3 million stone blocks, with each of them weighing about 2.5 tons on average. The 4,500-year-old Egyptian pyramid, which was built around 2560 BC, is 455 feet high and 756 feet in length on each side and is oriented perfectly to the points of the compass.

Ancient historians were told in 450 BC that the pyramid was built over a span of 20 years by a workforce of about 100,000 slaves. There was a stone causeway added to the building which connected it to a nearby temple which took another 10 years to construct. The huge stones were lifted into place by early types of machinery and the pyramid was built as a great tomb for the Pharaoh Khufu. 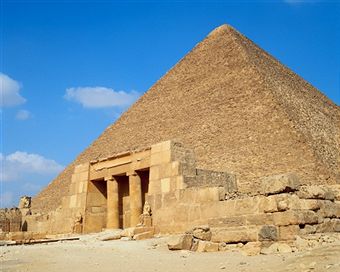 However, a Greek historian named Herodotus, said that many Egyptians hated Pharaoh Khufu because of the enormous burden placed on the Egyptian people during the building of the Great Pyramid of Giza. There are three smaller pyramids on the site as well as two other large ones, which are the Menkaure and Khafre, and were built later.

Other Egyptians believed the pharaoh was a living god as well as a king and the pyramid is an eternal tomb which links earth with heaven. The Great Pyramid of Giza, which is also commonly known as the Pyramid of Cheops and the Pyramid of Khufu, is filled with several passageways as well as a Queen’s Chamber, King’s Chamber, and Grand Gallery.

Present day engineers have stated they don’t believe it took that many people to build the pyramid or it actually took that long to erect. They believe a huge ramp and possibly several smaller ones were used during construction and the stones were dragged into place and positioned by levers. It’s also their theory that slaves weren’t used to build the structure, but it was a huge team of skilled labourers.

The pyramid was originally about 30 feet taller and was also built with a polished, smooth white limestone surface and had a capstone at the top of it, which was possibly coated in gold. However, Arabs stripped the limestone casing from the structure years later and even removed the top 30 feet of stone while trying to take the pyramid down.

When it was completed, the pyramid was the tallest man-made structure on the planet and remained that way for the next 3,800 years until the Lincoln Cathedral was built in England. The Great Pyramid of Giza and its surrounding complex is a remarkable sight to behold and even more remarkable when you consider when it was built. With several theories concerning how the structures were built, nobody really knows for sure how these amazing pyramids erected. It’s one of the mysteries of the world and also one of the reasons the Great Pyramid is such a popular tourist attraction.