La Tomatina is more or less the world’s biggest food fight which takes place each August (every last Wednesday) during a week-long festival in the Spanish town of Bunyol. The premise of the event is to basically throw tomatoes at anyone who moves. The roots of the event can be traced back to a food fight in the town during 1944 or 45.

It became an approved event by local council in 1950, but only lasted a year as it wasn’t allowed in 1951. It started up again the following year and people started launching tomatoes in pretty inventive ways, such as with catapults and primitive types of cannons. 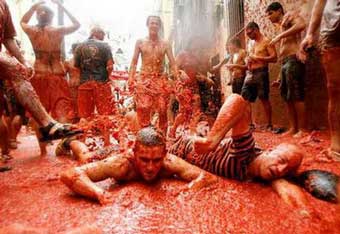 he La Tomatina festival grew more chaotic with each passing year and it was banned again in 1957. It appeared this could be the death of the event as anybody caught throwing tomatoes was threatened with jail. However, local residents had some fun that summer as they held a mock funeral procession for the tomato and paraded down city streets with a coffin which was accompanied by a local band which played funeral marches during the procession.

After quite a bit of public pressure from the locals, the government finally relented and La Tomatina resumed in 1959. However, some rules were implemented. For example, people had to wait until the sounding of a horn until they could throw tomatoes and when it sounded again they had to stop.

From 1975 to 1980, the tomatoes were supplied for the participants instead of them bringing their own. The city now provides the tomatoes and increases the amount of tonnage each year. The festival was always popular and garnered interest around the world, especially from the press. In 2002 it was named a Fiesta of International Tourist Interest.

When attending La Tomatina, the festivities get underway at 10 am with an event known as “palo jabon”. During this festivity, contestants must climb up a greasy pole to reach a ham that has been placed on top of it while spectators sing and dance below. As soon as somebody can reach the ham and knock it off the pole the tomato fight begins.

The tomatoes are trucked in to Plaza del Pueblo and are grown in Extremadura, exclusively for the event. Most participants wear gloves and goggles for protection, but the rules state that the tomatoes have to be crushed before they can be thrown, as a safety measure.

The fight lasts for one hour converting the town square into a sea of red. The mess is cleaned up by fire trucks and participants, and spectators help with the cleaning up by hosing down the cobblestone streets, etc. In addition, the streets are cleaner after La Tomatina due to the acid in the tomatoes, which disinfects the stones. There are also some public showers available down by the river to clean yourself off after the tomato turmoil.

It’s estimated that the population of Bunyol swells to about 30,000 for the event from its regular population of about 9,000. This makes it hard to find a hotel room and many people stay in nearby Valencia and take the train to Bunyol for the food fight.