The deep waters off of the coast of Alexandria, Egypt were explored by several archaeological divers looking for artifacts back in 1994. What they discovered on the floor of the sea were large stone blocks as well as remnants of a sculpture which turned out to be ancient 34d Century BC ruins of the great lighthouse of Alexandria, known as the Pharos, which is considered to be one of the seven wonders of the ancient world.

Alexander the Great founded the city of Alexandria in 332 BC. However, he also named numerous other cities Alexandria, but the majority of them didn’t last. The Egyptian city was different though, and it prospered for centuries. The conqueror built the city about 20 miles west of the Nile River and just north of Lake Mareotis. He then built a canal between the river and lake and Alexandria featured two separate harbours. One was for traffic on the Nile, while the other was used for trade to the Mediterranean Sea. 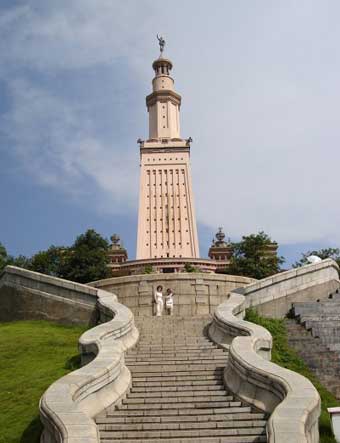 After Alexander’s death in 323 BC, Egypt’s new ruler, Ptolemy Soter, completed the city and it became very prosperous. However, he felt Alexandria needed some type of structure to guide in the trade ships to the harbor. He solved this problem in 290 BC by starting construction on the Pharos. After completion 20 years later the Pharos became the world’s first lighthouse. It was also the tallest man-made structure in the world after Egypt’s Great Pyramid of Giza.

It’s believed that the magnificent lighthouse was designed by Sostratus of Knidos, but some historians argue that he only financed the structure. Either way, Sostratus wanted to carve his name into the building’s foundation. But Ptolemy II, refused since he wanted his name only on the lighthouse. Sostratus more or less ignored Ptolemy II and engraved his name and a dedication in the foundation and covered it in plaster. He then engraved Ptolemy’s name in the plaster. After they had both died, the plaster eroded and Sostratus’ engraving was revealed.

The lighthouse was named the Pharos after the small island that it was built on and in later years the word pharos meant lighthouse in Romanian, Spanish, Italian, and French. During the 10th century, the Moors described the building as being between 450 and 600 feet tall and resembled a 20th century skyscraper. The lighthouse had three sections to it which were placed on top of each other. It was made out of white marble blocks that were stone faced and held together by lead mortar.

The inside of the lighthouse had staircases and a shaft which was used to send wood up to feed the burning fire and a huge curved mirror was used to reflect the light of the fire into a bright beam that the sailors could follow. During the daytime, ships could see the smoke from the burning fire from a distance of about 100 miles and the beam from the fire at night. Legend has it that the light from the mirror was also used as some type of primitive weapon that could start fires on enemy ships when it reflected the sunlight.

The building was said to be decorated with statues, including four of the god Triton, and artifacts found by archeologists support this theory. Also, the lighthouse became a popular tourist attraction and allowed for spectacular views of the sea.

Historians believe the Pharos lighthouse at Alexandria wound up in the Mediterranean Sea due to an earthquake. However, it stood proudly for more than 1,500 years and is thought to have survived a tsunami in 365 AD. It suffered minor damage later on and had to be restored, but lost close to 70 feet of its height. The Pharos suffered major damage in an earthquake in 1303 and was believed to have collapsed into the sea during 1375. The ruins of the lighthouse stood until 1480 and were then used to build a fortress on Pharos, which is still there today.

When visiting the area today, you’ll find it has been turned into an underwater archaeological diving park. Visitors can dive into the sea and explore the ancient ruins of the lighthouse at Alexandria.