The African continent features numerous historical sites to visit. Each one of its nations offers something special when it comes to man-made attractions and natural beauty. One of the most popular attractions on the continent is South Africa’s Rhodes Memorial, which sits on Devil’s Peak in the magnificent city of Cape Town.

The memorial was erected to honour a South African politician named Cecil John Rhodes, who was actually born in 1853 in England. Rhodes left Europe for South Africa when he was 17 years old and died in 1902 when he was just 49. Sir Herbert Baker designed the memorial, which was built in one of Rhodes’ favourite locations, which was the lower section of Devil’s Peak. Rhodes enjoyed sitting on a bench here as a young man where he could soak in the spectacular views of the nearby mountains and Table Bay. Rhodes’ favourite bench still sits beneath his memorial. 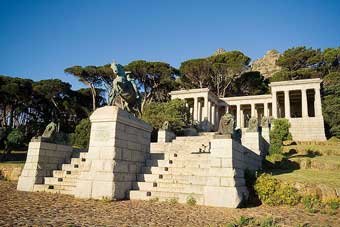 Historians believed Baker’s inspiration for the Rhodes Memorial came from the ancient Greek temple which is located in Segesta, Sicily. But most observers feel the memorial that Baker built between 1906 and 1912 is similar to the Temple of Pergamon in Turkey.

There is a large staircase in the memorial with each step representing a year of Rhodes’ life. The staircase heads up to a wonderful monument consisting of pillars, which was made with Cape granite gathered from Table Mountain.

At the bottom of the stairs is a bronze horseman’s statue along with a bust of Rhodes and eight bronze lions. There’s also an inscription that pays tribute to the work, service and dedication of Rhodes tom the South African people.

Rhodes was also a respected businessman who became wealthy through diamond mining. In 1880 he founded the De Beers Mining Company along with a couple of more companies in later years. By 1890 he was the Cape’s prime minister and served the people until resigning six years later.

Rhodes’ main aim in life was to establish a British colony from Cape Town all the way to Cairo, Egypt. He was also a landowner who owned some of Table Mountain’s lower slopes. Some of his estate was donated and now houses the upper campus of the University of Cape Town. Another parcel of the land houses the Kirstenbosch National Botanical Garden.

The Rhodes memorial actually resides in the Table Mountain National Park where there’s a famous restaurant and tea room behind the structure. It’s a popular location for people to start hikes to Devil’s Peak. The memorial is surrounded by stone pine and oak trees. The Afromontane forestis also close by which has several wild and rare silvertrees. There’s also a small area near the memorial that houses wildlife such as zebra and wildebeest.

The Rhodes Memorial occasionally hosts live performances and events as well as an annual Easter service. It’s open during the day, but closes down from sunset to sunrise.  Interestingly, there was an alternative memorial to Rhodes discussed which was to have been a statue of him looking over Cape Town from the top of Lion’s Head. This would have been similar to the figure of Christ which overlooks Rio de Janeiro in Brazil.