The Rio de Janeiro’s Carnival is one of the most popular and biggest carnivals in the world. The city of Rio de Janeiro is surrounded by beautiful locales, luxuriant tropical forests and exotic beaches. However, even more famous is the spectacular Rio Carnival that lets you enjoy the cultural beauty of the city. 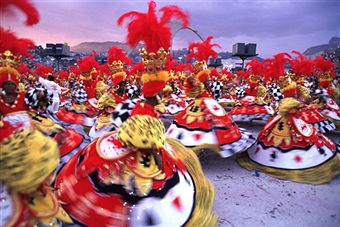 During the fest, Rio de Janeiro turns into a spot where you can witness cultural display parades, enjoy rhythmic music and street parties. The carnival lasts for a week and ends before Ash Wednesday and on each day you can see parades and people grooving to the beats on the streets. The whole city of Rio de Janeiro gets into the party mood; however the main center of all attraction is the Sambadrome. It is a specially designed stadium for carrying out parade. In fact, it is the starting place from where the parade begins. At this place, you can find quite a few samba training schools.

During the festival, samba schools participate in samba dancing competition to win the title of the best dancing group. Scores of percussionists and performers flaunt their skills and dance to the non-stop Samba music. The parades also last for seven days. However, the best of action, talent, brilliance and creativeness can be seen after the sunset on Sunday and Monday.

The most lavish event of the carnival is Copacabana Ball. Many rich and famous people and even celebrities can be seen enjoying the ball. Another event in which you can see the drag queens of Ipanema get into the party mood is the mega event called Banda de Carmen Miranda. If you want to be a part of the Rio Carnival, you should book your air flight tickets well in advance because many tourists plan to visit Rio during the carnival period. You need to pre-book your accommodations as well as the hotel rates get expensive around the carnival time.