The Olympic Games have always been an important festival for the Greeks. The games were held to honour Zeus, who was the king of their gods. According to historians, the very first Olympics took place during 776 BC in Olympia at a shrine dedicated to Zeus. The event helped bring the warring Greek states together and a truce was declared for them. This enabled people from all over the region to travel and compete in safety.

There was a huge stadium on the site as well as several temples. The dedication to Zeus was quite simple at the time. However, as the years went by and the Olympics became more popular, a larger temple was needed in honour of the god. Work on a new temple, which was designed by Libon of Elis, began sometime around 470 to 460 BC and was finished in 456 BC. It was similar in some ways to the Temple of Artemis in Ephesus and the Parthenon in Athens. 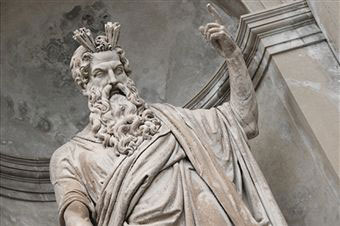 The slightly-peaked roof was supported by 13 huge columns along its sides and six more at each end and was filled with artistic sculpture. When completed, the temple was considered a masterpiece, but citizens felt something more was needed to honour Zeus, such as a statue for the interior of it. After it was erected, the statue of Zeus at Olympia became one of ancient world’s seven wonders.

The statue was designed by a sculptor named Phidias, who had already designed a statue at the Parthenon for goddess Athena. Phidias started work on the new statue about 432 BC and had it completed 12 years later. The structure stood at the temple’s west end and was over 40 feet in height and 22 feet in width. The statue depicted Zeus sitting on a throne and its head nearly touched the roof of the temple.

Zeus was holding the goddess of victory, Nike, in his right hand and a sceptre in his left which had an eagle on top of it. The throne was built out of ivory, ebony, gold and precious stones and had mystical creatures and Greek gods carved into it. Zeus’ skin was made of ivory and the robe, hair, and beard was constructed with gold. The statue was treated with olive oil so it wouldn’t crack in the humidity.

According to legend, when the statue was completed, Phidias asked for a sign from Zeus to let him know the statue was suitable for the god. A thunderbolt then hit the temple causing no damage and this was taken as a sign of approval. Because it was believed that Zeus liked the statue, several replicas were made, but none of them survived.

However, when Phidias returned home after building the statue, he was accused of carving unapproved images on sculptures in the Parthenon and died in jail while waiting to go on trial. The statue of Zeus was damaged in 170 BC during an earthquake, but was quickly repaired. It lost a lot of its lustre though during the fourth century when Emperor Constantine stripped all of the gold from pagan shrines after the region converted to Christianity.

The Olympics were halted in the year 392 by a Roman emperor named Theodosius I as he felt they were a pagan ritual. Historians believe the statue of Zeus was then moved to Constantinople and became a part of a private collection. It’s also thought that it was destroyed in the year 475 by a fire. But other historians say the great statue was still in the Olympic Temple in 425 when it burned to the ground.

In 1829, archaeologists found the ruins of Olympia’s temple along with pieces of a sculpture and sent them to the Louvre in Paris. Another expedition in 1875 found more pieces of sculpture as well as the remains of the pool that held the olive oil to treat the statue of Zeus. During the 1950’s another team located Phidias’ workshop and tools underneath a Christian church. If you visit the stadium at Olympia today you’ll find a restored stadium and ruins of the temple. However, unfortunately, the statue of Zeus at Olympia is nothing but a wonderful memory.