By the time Crusaders entered the city of Ephesus in the year 1100 in Asia Minor, it had been renamed Ayasalouk and the Temple of Ephesus had been destroyed about 800 years earlier. But centuries later it’s still regarded as one of the 7 wonders of the ancient world. According to Philon of Byzantium, the temple was so beautiful that it easily outshone some of the other seven wonders, such as the Hanging Gardens of Babylon, the Great Pyramid of Giza, the tomb of Mausolus, and the Colossus of Rhodes.

The once great city of Ephesus was known as one of the world’s busiest ports and the Goddess Artemis was honoured in 800 BC by building of a temple. To local residents, she was the goddess of fertility. However, the original temple was destroyed and had to be rebuilt a few times during the next few centuries. 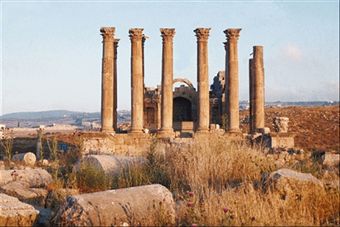 An architect by the name of Chersiphron was called upon to construct a new, bigger temple with high columns made of stone around 600 BC, but it was destroyed in battle about 50 years later. The city’s new ruler, Croesus, then had another replacement built. This version was designed by an architect named Theodorus and it was built 300 feet long and 50 feet wide with 100 stone columns. It was almost four times larger than the previous building.

This temple lasted until 356 BC when Herostratus set fire to its wooden roof and the entire structure was destroyed. Herostratus paid for the act of arson with his life as the citizens of Ephesus tortured him to death. A new temple had to be built and this time a famous sculptor named Scopas was the architect.

The new building was made out of marble and had 36 columns which were carved with figures. It was filled with numerous fine works of art and four bronze statues depicting Amazon women. According to legend, the Amazons originally founded Ephesus. The temple was even bigger than the last one wand was supported by 127 columns that were 60-feet tall, making it larger than the Parthenon in Greece.

Historians believe the temple was finally completed 120 years after it began, but some argue it only took about 60 years to build. When Alexander the Great visited the city in 333 BC, it was still unfinished and he offered to pay for the rest of the construction costs if he was credited as a builder and had his name engraved on it. However, the city fathers politely refused. Many visiting pilgrims came to the prospering city of Ephesus after the temple was completed to view it.

The temple of Artemis at Ephesus was destroyed again in the year 268, this time by the invading Goths. However, it was once again rebuilt. But Theodosius the Great, a Roman emperor closed it down in the year 391 when Christianity became the religion of the city.

A mob of Christians destroyed it in the year 401 and used the stones from the structure for other buildings. A century later, another Roman emperor named Constantine saw the city of Ephesus was in decline and rebuilt much of it, but didn’t want to erect a new temple. Ephesus eventually declined even more and many of its residents left to live in the surrounding countryside.

The British Museum searched for the temple in 1863 and eventually found its ruins six years later. The site was excavated and some of the sculptured sections of the temple can now be found in the museum. The museum kept exploring the site and in 1904 it found the remains of five temples, with each one of them being built on top of the ruins of another.

The site is located near a town in Turkey named Selçuk, and is basically a wet field. There is a lone column which was built to honour the site of the great temple of Artemis at Ephesus.