One of the greatest things about visiting Bangkok, Thailand, is that several of the most popular attractions in the capital city are located close to each other. Next to the Grand Palace, you will find the popular monastery that is known as Wat Pho, which is known as the most essential temple during King Rama I’s reign.

The monastery is also known as the Temple of the Reclining Buddha, and is regarded as the most important one in Bangkok. This is because the king personally looked over the seven- and-a-half year restoration of it in 1788 from an old monastery during the Ayudhya period. After it was restored, King Rama I had it turned into a royal monastery next to the palace. Some of the king’s ashes were kept there under the principal Buddha in the main chapel after his death. 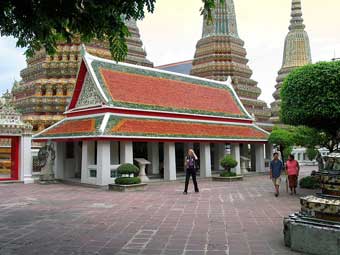 Wat Pho sits on 20 acres of land just south of the Grand Palace. It consists of two main areas, the chapel and monks’ quarters, which are separated by a tall white wall, and is well known as the temple where the large Reclining Buddha is kept on display. It was restored and extended again years later over a period of 16-and a-half years by King Rama III.

The temple is also known as a famous center of local intellect and cultural heritage and as a place where religious rites are carried out. It is one of the oldest and biggest monasteries in Bangkok and there is plenty for visitors to see as it houses over a thousand images of Buddha in addition to the Reclining Buddha. The Reclining Buddha is one of the largest in the world as it is about 151 feet in length and 50 feet tall. The Buddha is covered in gold plating and has mother of pearl on its eyes as well as on the soles of its feet.

The monastery is also believed to be where the origins of Thai massage were founded and is also the current home of a massage school. Wat Pho is still used as a Buddhist monastery today as monks live and attend school there.

Wat Pho is situated on Maharaj Road and Sanam Chai Road and sits next to the famous Grand Palace. All visitors are politely asked to dress in a respectable manner and no shorts are allowed. It’s also recommended that you take off your shoes before entering the temple.

Wat Pho is easy to get to by taxi and it is serviced by several bus routes. If you’re travelling by river taxi, you can get off at either Pak Klong Talad Pier, Tha Tien, or Tha Chang and then walk over to the entrance of the monastery.

Wat Pho offers visitors a great opportunity to experience a working monastery along with an original Thai massage at the same location.