If you thought that South America was all drug smuggling, political instability and dancing the tango, you would be very wrong indeed. For one of the most stunningly beautiful as well as the most stable and prosperous of South American nations is Chile. This beautiful country is a long and narrow land that runs almost all down the western coast of the South American continent. The mighty Andes mountain range binds its eastern borders whereas its long coastline gives Chile some very unique physical features.

It has great extreme in climate and temperatures. Whereas in its north you have one of the driest regions in the world – the Atacama Desert, parts of the country enjoy mild Mediterranean type climate, and the southern regions feature glaciers and alpine tundra. It has rich forest resources as well as grazing land. It is also a land of volcanoes and lakes. The southern coastline is a complex of canals, intricate inlets, islands, peninsulas and fascinating fjords. 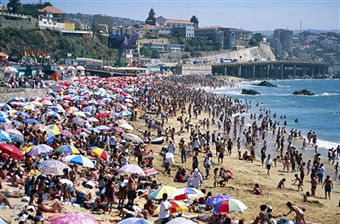 The capital city Santiago is a modern, prosperous metropolis with traditional as well as contemporary high rise architecture, a well developed public transport system and smart shopping centers. Many of the older buildings have perished in this earthquake prone zone but many do remain from the Spanish colonial ear. The city has many parks and is specifically designed to be bicycle friendly. In addition there is the fine arts museum, impressive government buildings, central squares and impressive sports venues to admire here.

One of the major tourist attractions is the special region, Easter Island, which lies just of the western coast in the Pacific Ocean. The large stone statues of the ‘Moai’ (a total of 887 monolithic statues) which are the symbol of Easter Island, date back to 1100–1680 AD.

In addition, beach towns like Iquique, Arica, La Serena, Antofagasta, and Coquimbo as well as Pucón on the shores of Lake Villarrica are other attractions. The extreme zones of Chile provide many options for travel and sightseeing. The northern areas offer attractions such as the altiplano lakes, the valley of the Moon and several impressive volcanoes as well at the ancient Incaic architecture to admire.

There are stunning Chilean beaches that offer some of the best surfing locations in the world. To the south there are several world class ski resorts. In addition there are world heritage sites here, national parks, and more if you decide to make Chile a holiday destination.