The ancient Colossus of Rhodes stood at the entrance to the harbor of the city of Rhodes on the Greek island of the same name more than 2,000 years ago. The statue was in honour of a titan named Helios and was erected between 292 and 280 BC as a symbol of freedom. The spectacular statue was about 110 feet in height, making it one of the tallest man-made structures in the world at the time and is also known as one of the seven wonders of the ancient world.

Rhodes was an important island in ancient times as it was one of the world’s busiest economic centres due to its location where the Mediterranean Sea meets the Aegean. The city of Rhodes was erected on the north coast in 408 BC on the island’s most natural harbor. 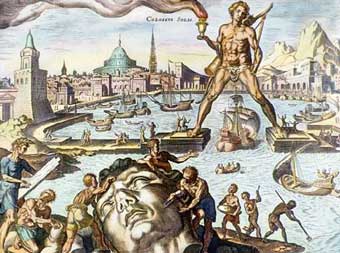 Mausolus of Halicarnassus conquered the island in 357 BC. However, the Persians took it over by 340 BC before Alexander the Great took control of it during 332 BC. However, Alexander died in his early 30’s due to a deadly fever and his generals then fought for control of his vast kingdom.

Three of the generals – Seleucus, Antigous, and Ptolemy – eventually took control and split the kingdom between themselves. The Greeks supported Ptolemy and this didn’t sit too well with Antigous, whose son Demetrius intended to capture and punish the city of Rhodes in 305 BC. Demetrius’ had an army of 40,000, which was larger than Rhodes’ entire population.

However, Rhodes was protected by a huge wall and the invaders had to use mobile wooden towers to climb over it. The largest tower was destroyed by a storm, which ultimately saved the city of Rhodes. Demetrius then built another tower which was about 150 feet in height and was outfitted with several huge catapults and also offered protection to his troops. The iron-wheeled tower even had water tanks in it to help put out any fires in case it went up in flames after being hit with burning arrows.

Demetrius was stopped in his tracks though when a moat was built outside of the city walls and a fleet of Egyptian ships came to help out the army of Rhodes. Demetrius abandoned the tower and signed a peace agreement. But he insisted he was victorious since Rhodes remained neutral in his ongoing war with Ptolemy.

The citizens of Rhodes felt differently and celebrated the end of the war with Demetrius and their freedom by erecting the giant statue of the island’s patron god Helios. It was built with bronze that was melted down and Demetrius’ tower was used as scaffolding. It’s believed to have taken 12 years to build and was completed in 280 BC.

When finished, it was 110 feet high and was placed on a pedestal about half the height close to the entrance to the harbour. Some historians think the statue was semi-nude or nude with a cloak over the figure’s left arm shoulder or arm. Others believe there was a spiked crown on the head of it and the right hands was shading its eyes from the sun. Still, others believe the pose was similar to the present day Statue of Liberty in New York City. What is known, is that the statue was designed by sculptor Chares of Lindos, but he didn’t live to see the completion of it. Legend has it that there was a flaw in the design and he killed himself before it was built.

The Colossus of Rhodes shined in the sunny harbor for 56 years before collapsing during an earthquake in 226 BC. Large pieces of the structure were then strewn along the harbour for hundreds of years.

Popular belief is that Ptolemy III, the Egyptian king, offered to rebuild the statue, but the citizens of Rhodes turned him down. They believed the god Helios was perhaps offended by the statue and the earthquake was a sign that it should be taken down. Finally, the Arabs took over Rhodes during the seventh century and broke the remnants of the statue into smaller pieces and actually sold the scrap metal.