Among the Seven Wonders of the World, the hanging gardens of Babylon are considered the second oldest wonder in the world. The amount and intricacies that went into constructing this magnificent and gigantic wonder makes it worth the title of the natural wonder of the world. However viewing it now is not possible but this historic garden is known and had been popular for its luxury and beauty. 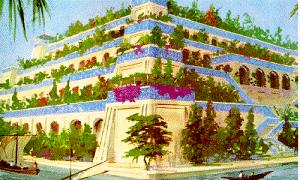 Many say that it was built in 600 BC by Nebuchadnezzar so that he could bring about joy in the life of his homesick wife. He built the garden thinking that the gardens would make his wife feel like she is back her fertile homeland. However opinions vary on the history of the gardens, many scientists connect its location to the modern-day Iraq and there are many who raise questions on its existence itself.

Unlike the name suggests, the garden is most probably not “hanging” but it is more like cascading of the balconies and terraces. The top has been hollowed in structure, and a host of streams and pillars run through it. Baked bricks and asphalt are used to construct the pillars.

There are domed terraces one above the other and they have cube shaped pillars. The hollow structure in the top was constructed to fill it with earth in order to plant trees. The garden is around 400 feet in width and the height goes up to 80 feet with the length being as long as 400 feet.

This historic place is vacant now with all its remnants in Iraq or in museums.