Hoi An is a beautiful city on the west coast of the South China Sea well worth visiting on your Vietnam holidays. Its buildings are a medley of old Vietnamese architecture and colourful French colonial buildings. The old town is a UNESCO world heritage site, boasting a quaint Japanese bridge from 16th-17th Century with a Buddhist pagoda attached on one side, the only known covered bridge like it. There’s also a house that has been restored to the way it would have looked centuries before. The house has a Pythagorean cup, which the owners call a Confucian cup – a cup that empties itself through the base if you overfill it, used as a metaphor for taking things in moderation. 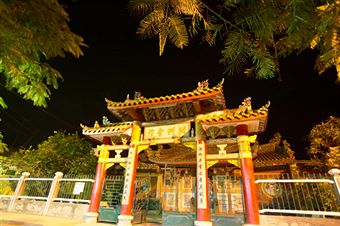 The town was made into a trading port some time in the late 1500s; and in the 18th century it was believed by the Japanese to be the greatest trading destination in all of South East Asia. The trading heritage is written all over it.

It’s almost strange, when in Asia, to find patisseries, but certainly not unwelcome. The French brought their love of baked goods with them. Anything you might want from a patisserie back home, you’ll find in one of the ones here. There is still pan au chocolat to die for in the patisseries of Hoi An. Other interesting relics here include Vespas outside shops which sell hand-crafted coloured lanterns in all shapes and sizes as well as other craftwork. Some shops even support fairtrade.

Hoi An is these days, probably most famous for its tailors. There are many, many shops that have rolls upon rolls of cloth, in all colours and textures, ready to be cut into anything you might imagine yourself wanting to wear. One of the most beautiful materials you will find is Japanese silk, which the tailors will spare no expense pointing out the softness of. The patterns on some of the cloths you will see on some of the lanterns in the streets, one in particular is very common. Most shops have English catalogues from well known companies which you can choose designs from, or you can draw anything you like and they’ll make it. It is no problem if you’re only here a short while, as it usually takes 3 days at the most for a garment to be completed.

There are some fantastic restaurants which specialize in fish dishes (many of the restaurants actually look out onto the river). Hoi An is also famous for its Cao l?u, a noodle pork and green vegetable dish only found here. It is said that water from a Cham well outside the town gives it a unique flavour. You will often be given dishes garnished on the top with dried fish.

It’s worth mentioning the quality of the hotels here as well. They are very reasonably priced, often available on the day of arrival and exceedingly comfortable. There are even some you can have a pizza delivered to you in your room in.