Much of India’s varied and turbulent history is encapsulated in the Golden Triangle of Delhi, India’s capital city, Jaipur, the capital city of Rajasthan state and Agra, the erstwhile capital of the Mogul Sultanate. Centuries of history, architectural marvels and ages of strife are frozen in stone here for the visitor to marvel at and create some unforgettable memories.

These three historical cities in the Northern part of India are located about between 200 and 250 kms from each other roughly in a triangular position. They are well connected by road, rail and air, making it easy for visitors to visit each in succession. 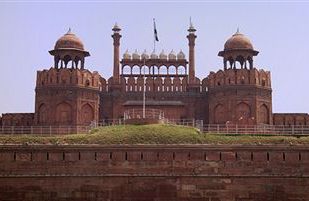 Delhi is all about layers – created as a capital city by the original rulers of India dating back to the times of the epic Mahabharata, invader after invader has laid claim to this city. In Delhi it is possible to find evidence of each of the seven times that it has been made the capital city in its long and tortuous history.

2. Lotus Temple: The stunning Lotus Temple that is welcoming of all faiths is a paean to India’s religious tolerance.

3. Qutub Minar: The Qutub Minar, standing tall and proud for centuries now is a both a marvel of architecture and something of a symbol of Delhi itself.

4. Jantar Mantar: The Jantar Mantar speaks of the knowledge that ancient Indians had of astronomy and of the movement of the celestial bodies.

5. India Gate: The India Gate in the heart of New Delhi is a symbol of national pride and a salute to nation’s martyrs.

There is of course the peerless Taj Mahal here – one of the best known and most photographed buildings in the world. But there is much more to Agra – the Agra fort with its pavilions, intricate mosques, and impressive battlements is steeped in historical intrigue.

There is Sikandra, the mausoleum of Emperor Akbar – a unique amalgamation of Islamic and Indian architectural styles. And there is the beautiful, mysteriously abandoned Fatehpur Sikri a stone city frozen in time.

This was India’s first planned cities; the pink walled city with its grid like structure bearing evidence to this. Jaipur boasts as many as three stunningly beautiful palaces strategically located on top of hills as well as a city palace. And then there is the Hawa Mahal and the Jaipur Jantar Mantar to see as well.