Mussoorie, rightly called the Queen of Hills, is a scenic hill station at 6,600 ft above sea level in the Garhwal Hills of the Himalayan Mountain Range in Dehradun district of Uttarakhand, India. Mussoorie is believed to derive its name from the local Mansoor shrub and the hill station is called Mansoori by the local residents. 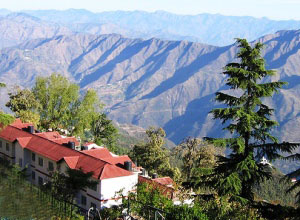 With lush green hills, several species of flora and fauna and spectacular views of the snow capped mountains to the north-east and Doon Valley & Shivalik ranges in the south, Mussoorie is an alluring place. Trekking in Mussoorie is a popular activity with 3 main trekking trails – Mussoorie-Nag Tibba, Mussoorie-Bhadraj and Mussoorie-Dhanolti.

Listed below are some of the major tourist attractions of Mussorie.

Van Chetna Kendra is a beautiful park situated about 2 km from Mussoorie on the Tehri bypass road. One can walk or take a taxi to the park. Dense pine forests and pretty flowering shrubs surround the park. Wildlife and birds like Ghurar, Kakar, Himalayan Peacocks and Monal are found here.

Mist Lake situated on the Mussoorie-Kempty road about 5 km before Kempty falls is a lovely picnic spot. There are several cascading waterfalls made by the River Kempty flowing through this lake. Boating is available for visitors looking out for a serene and peaceful experience.

Municipal Garden is a pretty garden at a distance of 4 km from Mussoorie on the Mussoorie-Dehradun road. It can be reached by rickshaw cycles, ponies or cars. One can also walk to the Municipal Garden via Waverly Convent School road which is at a distance of 2 km. The garden is a popular picnic place with an artificial mini lake. Paddle boats are available for a pleasant boating experience on the lake. Stunning views of the Doon Valley and nearby villages can be had from this garden.

Nag Devta Temple is on the Cart Mackenzie Road about 6 km from Mussoorie. The enthralling Doon Valley and Mussoorie can be seen from here.

Charming Mossy Falls is at a distance of 7 km from Mussoorie. One can reach the falls going via Barlowganj or Balahisar. Surrounded by thick forests, one can have a pleasant picnic at these falls.

Park Estate or Sir George Everest’s House is the house and laboratory of Sir George Everest, the renowned Surveyor-General of India from 1830 to 1843. It is at a distance of 6 km from Gandhi Chowk/Library Bazaar. Spectacular views of the Doon Valley, the River Aglar Valley and the snow capped Himalayan Mountains can be had from this place. Park Estate is also popular as a picnic spot.

At a distance of 9 km west of Mussoorie is Jwalaji Temple on the top of Benog Hill at an altitude of 2,240 m. The temple is surrounded by dense lush forests. There is an idol of Goddess Durga in the temple. Gorgeous views of the Himalayan Mountains, the Aglar River Valley, the Doon Valley and Yamuna Valley can be had from here.

Benog Mountain Quail Sanctuary is about 11 km to the south of Library Point and spreads over an area of 339 hectares. It is well known for Mountain Quail, the extinct bird species which was last seen in 1876.

Himalayan Weavers is a manufacturing facility/shop situated about 8 km from Mussoorie on the Mussoorie Dhanaulti Road. It is well known for its hand-woven shawls, scarves, stoles and throws using natural dyes and fibers.

Standing at 2,122 m, Gun Hill is the second highest point in Mussoorie. There is an exciting ropeway ride to Gun Hill. The views of the Himalayan Mountain Ranges like the Bunderpunch, Srikantha, Pithwara and Gangotri Group and panoramic views of Mussoorie and the Doon Valley from Gun Hill are simply superb.

Camel’s Back Road starts at Kulri Bazar near Rink Hall and ends at Library Bazar. It can be seen from the vicinity of Mussoorie Public School. Walking and horse riding on Camel’s Back Road are popular activities. Also don’t forget to view the spectacular sunset from here.

Serene Mussoorie Lake on Mussoorie-Dehradun road is about 6 km from Mussoorie and is well known to picnic revelers. It gives a gorgeous view of the Doon Valley and surrounding villages. Pedal boating is another attraction at this lake.

Sahastra Dhara which means a thousand fold spring, is a sulfur spring situated 14 km from Dehradun. The waters from the spring form a magnificent waterfall dropping down from a height of 9 m. The waters of the spring are believed to have medicinal properties. The River Baldi nearby is a pretty picnic spot. Sahastra Dhara is well served by buses.

The gorgeous Kempty Falls is about 15 km from Mussoorie on the Yamunotri Road. Kempty Falls drops down from a height of 4,500 ft and splits into 5 separate falls. Kempty Falls derives its name from ‘Camp-Tea’, when the British had their tea parties here. Bathing at the foot of the falls is a very pleasurable experience.

Pretty Dhanolti or Dhanaulti is at a distance of 28 km from Mussoorie on the Mussoorie – Tehri Road and features forested slopes and pleasant breezes. The views of the Valleys and the snow covered Himalayan Mountains from here are simply amazing. Also visit the 2 eco-parks here and explore the 2 forest trails. Accommodation is available in the form of a Tourist Bungalow.

The religiously important Surkanda Devi Temple is situated on the Mussoorie – Tehri Road at a distance of 33 km from Kaddukhal Village and 8 km from Dhanolti. The temple is at an altitude of 3,030 m. One can go to Kaddukhal by bus or car and then walk 2 km to the temple. A fair is held at Surkanda Devi Temple during May and June drawing thousands of people taking part in the fair with great fervor. One can also view the snow capped Himalayan Mountains from here.

Nag Tibba, surrounded by thick lush forests is at a distance of 55 km from Mussoorie. One can reach Nag Tibba by driving to Thatyur at a distance of 34 km and trekking a further 7 km to Devalsari. Another 14 km trek from here leads to Nag Tibba. There is a forest rest house available.

Bhadraj Temple is situated 15 km from Mussoorie and is dedicated to Lord Bal Bhadra, brother of Lord Krishna. Views of the Doon Valley, Chakrata Mountain Ranges and Jaunsar Bawar areas from here are astonishing.

This beautiful spot is located about 27 km from Mussoorie on the Chakrata-Barkot Road.

Happy Valley is a Tibetan settlement situated 2 km from the Library end of the Mall in Mussoorie. One can take a taxi to reach this place.

The beautiful Jim Corbett National Park, spreading over an area of 521 square km is situated at the foothills of the Himalayan Mountains in Ramnagar, in Nainital District of Uttarakhand. The Ramganga River flows through the park.

The best time to visit Corbett National Park is from November to May.

The scenic town of Chamba in the district of Tehri Garhwal is about 31 km from Dhanolti at an altitude of 1,676 m. The road to the town goes through charming fruit orchards. The bewitching Himalayan Mountains are always there in the background. The town of Chamba is surrounded by thick lush pine and deodar forests. Chamba offers a heart stopping view of the ravines, Himalayan Mountains and the Bhagirathi River.

Going past Kempty Falls is the Lakha Mandal Temple about 125 km from Mussoorie and 75 km from Dehradun on the Mussoorie – Yamunotri Road. Dedicated to Lord Shiva, the temple is in the North Indian architectural style with a high tower and several carved stone images. Two life size stone statues believed to be of Bhima and Arjuna are found within the temple complex.

Location: Mussoorie is situated in the Garhwal Hills of the Himalayan Mountain Range in the Dehradun district of Uttarakhand state, India. The adjoining towns of Landour, Barlowganj and Jharipani are considered part of ‘Greater Mussoorie.

Climate: Summer temperature ranges from 7.2 ?C to 31.2 ?C and the winter temperature from 1 ?C to 10 ?C. The monsoon or rainy season is from June end to September. Average annual rainfall/precipitation is 180 cm.

Best Time To Travel: April to June and September to October is the best time to visit Mussoorie.

By Flight: Jollygrant or Dehradun Airport is the closest airport to Mussoorie at a distance of 60 km but is not served by regular flights.

By Train: Dehradun Railway Station is the nearest railhead to Mussoorie at a distance of 34 km.

By Road: One can take a taxi or bus to reach Mussoorie from Dehradun. Mussoorie is well connected to major cities and has regular bus services. The distance from Mussoorie to Dehradun is 34 km, Haridwar 90 km, Dhanaulti 26 km, Shimla 276 km, Chakrata 26 km, Gangotri 250 km, Rishikesh 77 km and Delhi 278 km.