It was a wise man who said that travel is the best way to broaden your horizons. Traveling is enriching, educational, delightful, informing, memorable and it is also a whole lot of fun. 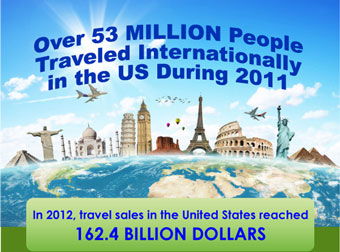 About 57% of all travel booking were made on the internet. This is the thing that has probably changed more than another other single factor relating to travel in recent times. Here are some fun travel facts for you:

Did you know some airlines require onboard pilots to eat different meals so as to lower the risk of all pilots falling ill? While attractive looking stewardesses may be great for the airline’s image, it also helps them save money! Quite simply, the lighter the individual, the less fuel is expended to convey them by air – so slimmer stewardesses translate to a healthier bottom line for airlines!

The Americans are great travelers it would seem. About one third of all the airports in the world are located in the US it is claimed. When they prefer air stewardesses over male steward and demand that the ladies should be all trim and slim, this has to do with plain economics.

There are around some 61,000 individuals traveling by air (actually airborne) over the territory of the US at any given moment of a day. In the year 2012, over 90 million Americans planned a trip or holiday online.

And this in spite of the Americans getting less paid leave than many other countries of the world – for instance the Italians get an average of 42 days of paid leave in a year, whereas the average American gets just about 13 days off each year!