Set amidst the green mountains and blue waters, Oahu Island, also known as The Gathering Place, is sure to enchant you with its rustic towns and beautiful beaches. With an area of 596 square miles, Oahu is the third largest Hawaiian island and is home to the majority of Hawaii’s population.

Oahu is divided into 5 regions: Honolulu, the Windward Coast, Central Oahu, the Leeward Coast and the North Shore. Honolulu is the state capital of Hawaii and lies on the southern shore of Oahu Island. 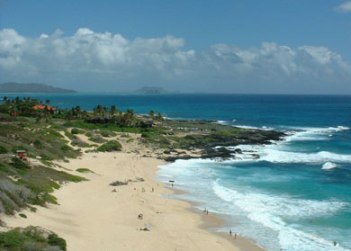 Here are some of the must-see attractions of Oahu Island:

The popular town of Waikiki is a neighborhood of Honolulu. Places to visit include Kapiolani Park, Fort de Russy Military Reservation, Duke Paoa Kahanamoku Lagoon, K?hi? Beach Park and Ala Wai Harbor. The TransPac sailing race which is held every 2 years begins in Los Angeles and ends at the Ala Wai harbor.

Kapiolani Regional Park is situated east of Waikiki. It has the Honolulu Zoo and the Waikiki Shell, which is a place for outdoor concerts. Other attractions include an archery range, tennis courts, soccer fields and a bandstand. Jogging is another favorite sport here. The starting and finishing lines of road races in Honolulu are in this park.

Situated on Waialua Bay at the mouth of Anahulu River, the town of Haleiwa is popular with surfers. There is a small boat harbor here. Haleiwa Beach Park on the north side and the Haleiwa Alii Beach Park on the south side border the bay’s shore.

The famous and historic Pearl Harbor or Puuloa, is a lagoon harbor situated west of Honolulu. A large part of the harbor and surrounding lands is a deep water naval base of the United States Navy. The U.S. Pacific Fleet is headquartered there. Pearl Harbor has been designated a National Historic Landmark and there are 5 historic sites here.

Iolani Palace is the official residence of royalty. Its grounds and galleries are now open to visitors.

Diamond Head Crater has breath taking views from the top of Waikiki and Honolulu. The crater stands 760 ft tall. The way to the top consists of 2 sets of stairs, underground tunnels and old military bunkers.

Hanauma Bay Nature Preserve is a Marine Life Conservation District and is situated east of Honolulu. It is popular with snorkelers. Marine turtles are found here.

Standing in front of Aliiolani Hale in downtown Honolulu is the famous King Kamehameha Statue.

Best time to travel: Oahu is a year-round destination. However, the most popular period is December to March.

The island of Oahu is well connected with flights. Honolulu International Airport (HNL) is the major airport, about 20 minutes away from the town Waikiki.