Ras Mohammed National Park is widely regarded as one of the best dive sites in the world. The area is located near the Sinai Peninsula where two underwater currents collide, the Gulf of Suez on the west and the Gulf of Aqaba on the east. The park is rich in plankton and soft corals which attract over 1,000 species of fish. More than 100 types of fringing and hermatypic coral reef cover the shoreline providing a colourful backdrop during dives. Popular reefs, such as South Bereika, MarsaGhozlani, and Old Quay, summon countless sharks, sea turtles, manta rays, and 40 different species of star fish. 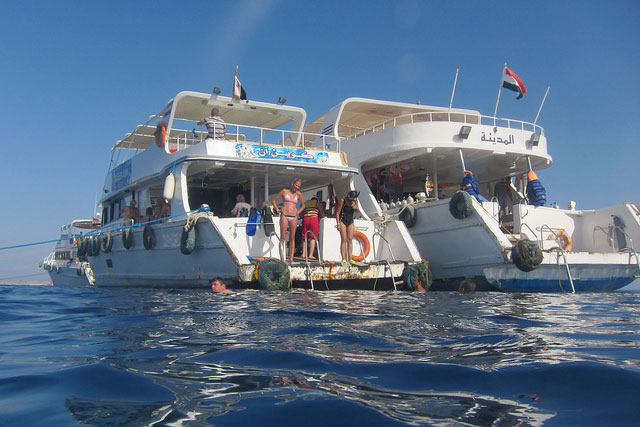 The Straits of Tiran separate the Red Sea from the Gulf of Aqaba. Four renowned reefs (Gordon, Woodhouse, Thomas, and Jackson) lie alongside the small and desolate Tiran Island. The area surrounding the reefs thrive with massive schools of bat fish, barracudas, eels, jacks, rays, parrot fish, goat fish, puffers, butterfly fish, and snappers. The water is warm, 20-27 degrees Celsius year-round, and offers up to 60 meters of visibility most days. Strong currents exist in the area which makes this site difficult for some beginners to enjoy.

Sharm el-Sheikh also provides easy access to one of the most famous wreck dives in the world. The SS Thistlegorm was a British Merchant Navy ship built in 1940. The ship was sunk by German warplanes on 6 October 1941 while it travelled through the Red Sea. The visible cargo in the ship includes trucks, motorcycles, armoured vehicles, guns, ammunition, two Bristol Blenheim planes (British bombers), and a steam locomotive. Lion fish, crocodile fish, scorpion fish, and tuna are easy to spot around and inside the wreck.

Other popular wreck dives include: Ghiannis D, a Greek ship sunk in 1983; The Carnatic, a steam ship that hit a reef in 1869 and remains intact on the sea floor; The Rosalie Moeller, which was bombed and sunk during World War II; and The Kingston, which hit Shag Rock in 1881 and rests 19 meters underwater on a sloped reef wall. These wrecks provide divers with a rare opportunity to observe century old ocean artefacts with crystal clear visibility.

It is possible to earn all major diving certifications in the waters surrounding Sharm el-Sheikh including PADI Open Water Diver, PADI Advanced Open Water Diver, PADI Rescue Diver, PADI Divemaster, and even PADI Enriched Air Nitrox Diver. There are more than 20 dive shops to choose from in the area with most staffed by highly regarded professionals.

Egypt is home to several of the best dive sites in the world. With warm weather, sunshine, and good tourism infrastructure, Sharm el-Sheikh continues to impress divers looking to vacation in scuba paradise. It’s the perfect time to explore Egypt’s natural beauty and learn a new water sport.