Situated on the upper River Bhyundar Ganga or Lakshman Ganga in the Paspawati Valley of the Garhwal region of the Western Himalayan Mountain range is the enchanting and bewitching Valley of Flowers National Park. Locally called the Bhyundar Valley, it is located at altitudes ranging from 3,250 to 6,750 m in the district of Chamoli, near the pilgrim town of Joshimath, in the state of Uttarakhand in India. 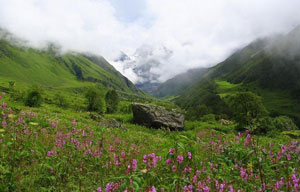 The Valley of Flowers National Park has been declared a World Heritage Site and spreads over an area of 87.50 sq km. with the highest point in the park being Gauri Parbat at an altitude of 6,719 m. The River Pushpawati flows through the park and divides it into two.

Blessed with rolling meadows, several species of colorful and attractive flowers, gushing streams and spectacular natural beauty, the Valley of Flowers National Park is also home to rare animals like the Asiatic black bear, snow leopard, brown bear and blue sheep. The park is open in summer from June to October.

Given below are some of the main attractions of tourist interest here:

The grave of the botanist, Miss Margarate Legge, with a memorial to her is located in the park.

Hemkund is at a distance of 19 km from Govindghat. The beautiful and picturesque Hemkund lake is situated at an altitude of 4329 m here. Close by is the Sikh Gurudwara, Hemkund Sahib and a temple dedicated to Lakshman. Thousands of Hindus and Sikhs come to this place which is a holy place for them. Lake Hemkund remains frozen during most of the year but melts in the summer and turns into a lovely blue lake. Attractive ferns, mosses and wildflowers grow on the banks of the lake. The Sikhs bathe in Lake Hemkund at this time of the year.

The scenic pilgrim town of Joshimath was founded by Adi Shankaracharya in the 8th century. It is at an altitude of 2,100 m. Nav Durga Temple, Narsingh Temple and Vasudeva Temple are some of the ancient temples found here. Joshimath is the base town for trekking to the Valley of Flowers.

The town of Auli is at a distance of 16 km from Joshimath and has exciting winter sports like ice skiing. Situated 23 km from Joshimath is the beautiful Nanda Devi National Park. Other interesting places to visit from Joshimath include Badrinath, Kedarnath, Chopta, Valley of Flowers and Hemkund Sahib Gurudwara.

The holy town of Badrinath is situated in the Chamoli district on the banks of River Alaknanda at an altitude of 3,415 m. It is at a distance of 301 km from Rishikesh. Badrinath is the most important of the 4 major sites in the Hindu pilgrimage. The famous Badrinath Temple is dedicated to Vishnu and is about 50 ft. in height with a small cupola on top and a gold gilt roof. It features a stone facade with arched windows.

The holy pilgrim town of Kedarnath is situated in the Rudraprayag district of Uttarakhand. It is at an altitude of 3,584 m and a distance of 14 km from Gaurikund. It is one of the 4 major sites in the Hindu pilgrimage. The holy and ancient Kedarnath Temple with its marvelous architecture is dedicated to Shiva.

Location: Chamoli district, near the pilgrim town of Joshimath, in the state of Uttarakhand, India.

Best Time to Travel: July to October is the best time to travel to the Valley of Flowers National Park.

Accommodation: Hotels, dormitories and tourist bungalows are available in Ghangaria, about 3 km from the Valley of Flowers National Park. One can also find accommodation in the Gurudwara in Ghangharia.

By Road: The Valley of Flowers National Park is off the Rishikesh-Badrinath road at a distance of 17 km from Govindghat, 25 km from Badrinath, 276 km from Rishikesh, 315 km from Dehradun, 529 km from New Delhi, 185 km from Srinagar and 39 km from Joshimath. One can take a bus from Rishikesh to Joshimath which is an 11 hour ride.

Another bus takes one from Joshimath to Govindghat which is a driving time of 2 hours and a distance of 22 km. Then visitors trek on a steep mountain trail from Govindghat to the village of Ghangaria situated along the River Lakshman Ganga and at a distance of 14 km. The trek from Govindghat to Ghangaria takes about 4 hours to 8 hours. From the village of Ghangaria a 3 km climb will take one to the Valley of Flowers National Park. Alternately one can also take a bus or taxi from Dehradun to Joshimath.