Away from the hustle bustle of urban life, Molokai Island in the Hawaiian archipelago, is a peaceful rural place where life is slow and relaxed. You won’t see much automobile traffic here. All you get to see is pristine natural beauty, serene beaches, beautiful rainforests and the soothing scene of green mountains touching the blue sea.

The old Hawaiian traditions and culture can still be seen. Aloha is a way of life here. And that’s the reason Molokai is also known as The Friendly Isle. 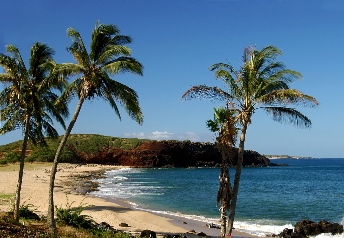 Major attractions of Molokai Island include:

Kalaupapa National Historical Park is situated on the central northern coast of the Island of Molokai. It is the habitat for rare species of animals.

This park is famous for being the site of Molokai Island Hansen’s Disease (leprosy) settlement from 1886 to 1969. Except for few of the patients, who chose to continue their stay on the island after the segregation policy was lifted in 1969, there are no active cases of Hansen’s Disease here.

Kaunakakai is the largest town and capital of Molokai, situated on its southern coast. It has many historic landmarks and the longest pier in the state. Boats can be hired for fishing, whale watching and snorkeling activities.

Situated on Kaluakoi Road, Papohaku Beach is a white sandy beach and is one of the longest beaches in the Hawaiian Islands. It is a good place for swimming, snorkeling and diving.

In addition to hiking and camping in the mountains, Halawa valley offers swimming, surfing and fishing. Two beautiful waterfalls, Moaula Falls and Hipuapua Falls are found here. Moaula Falls is a 2 tiered fall which plunges down from a height of 205 ft. Hipuapua Falls is the highest falls in Halawa Valley at 500 ft.

There are several well preserved ancient Hawaiian fishponds on the south shore of Molokai.

Kapuaiwa Coconut Grove is found on the south shore of Molokai, west of Kaunakakai. There is a constant danger of falling coconuts and hence entrance is disallowed to this grove.

Kiowea Beach Park is situated to the east of Kapuaiwa Coconut Grove. The shore is rocky, sandy and shallow. It is an ideal place for picnic and affords a beautiful view of the sunset.

Best time to travel: Round the year. December to March sees a heavy influx of tourists from the US mainland. Hence, if you are looking for a bargain, avoid this period. In this sense, April to December would be the ‘best value’ season.

Accommodation: Lots of hotels, resorts, condos and lodges are available.

One can board a flight from Honolulu International Airport Commuter Terminal (HNL) to Molokai Airport (MKK). One can also take a flight to Kahului Airport (OGG) on Maui and then go on the inter island ferry to Kaunakakai Harbor.